Trump on Birther Truthing: ‘Cruz Should Go To Court for Declaration of Citizenship’
video

Trump on Birther Truthing: ‘Cruz Should Go To Court for Declaration of Citizenship’ 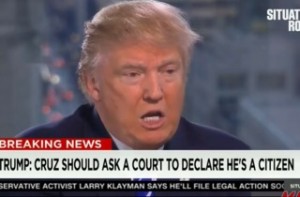 Regarding the media frenzy Trump whipped up this week when he implied that Cruz being born to American parents abroad could stand between the Texan senator and the presidency, Trump insisted that he didn’t even bring it up. Instead, he said, he simply answered a question that someone else asked him. “I don’t like even bringing it up,” he insisted. (Note that this supposedly unintentional drama appeared within hours of reports that Cruz surged in the polls ahead of the Iowa caucus.)

As for his own opinion, Trump claimed he “doesn’t know” what Cruz’s citizenship status is, but he believes that Cruz needs to go to a federal court and seek a declaratory statement that confirms he is an American .

When Blitzer asked Trump about critics who think he is bringing up Cruz’s birthplace to derail him just like he attempted to do with President Barack Obama, the candidate brushed it off, saying, “Who knows about Obama? Who cares? I have my own theory on Obama; someday I will write a book, I will do another book, and it will do very successfully.”

“I’m doing this for the good of Ted,” he concluded. “I’m not doing it for me. I like him! He likes me! We have a good relationship.”

CNN’s Gloria Borgor summed the issue up succinctly after the interview: “Have you ever heard of the technical term, ‘pot-stirring?’ That’s what this is.”