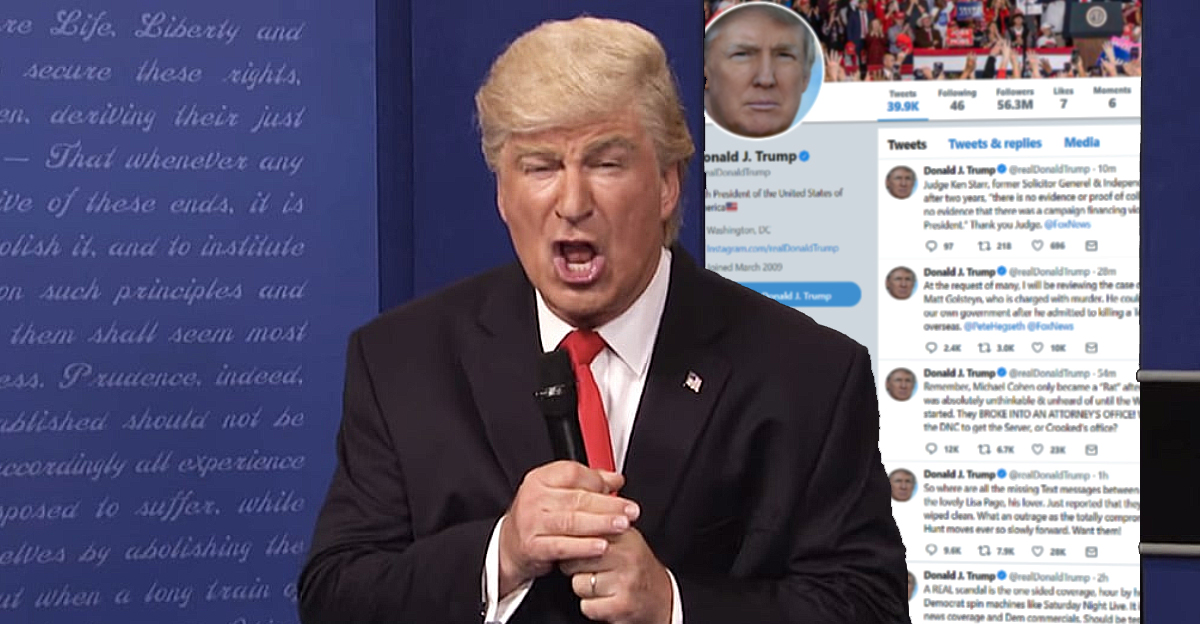 In his Sunday morning Tweet rants, President Donald Trump lashed out at Saturday Night Live and NBC as ‘Democrat spin machines’ and suggested they face legal trouble for it.

“A REAL scandal is the one sided coverage, hour by hour, of networks like NBC & Democrat spin machines like Saturday Night Live,” said Trump around 9 a.m. SNL’s cold open the night before featured a take on “It’s a Wonderful Life” in which an angel showed Alec Baldwin‘s Trump what the world would be like if he had never become president. The show hit him in several other sketches, including one bit in “Weekend Update” in which Colin Jost offered up “Impeachment Bingo.”

“It is all nothing less than unfair news coverage and Dem commercials,” said Trump, before suggesting it should face a court challenge.

A REAL scandal is the one sided coverage, hour by hour, of networks like NBC & Democrat spin machines like Saturday Night Live. It is all nothing less than unfair news coverage and Dem commercials. Should be tested in courts, can’t be legal? Only defame & belittle! Collusion?

The president immediately followed that call for investigation of comedy with a tweet about the text messages between disgraced ex-FBI agents Peter Strzok and Lisa Page, a frequent topic on Trump’s timeline.

So where are all the missing Text messages between fired FBI agents Peter S and the lovely Lisa Page, his lover. Just reported that they have been erased and wiped clean. What an outrage as the totally compromised and conflicted Witch Hunt moves ever so slowly forward. Want them!

Remember, Michael Cohen only became a “Rat” after the FBI did something which was absolutely unthinkable & unheard of until the Witch Hunt was illegally started. They BROKE INTO AN ATTORNEY’S OFFICE! Why didn’t they break into the DNC to get the Server, or Crooked’s office?

In both of the follow-up tweets Trump called the investigations a “Witch Hunt” again. It looks like he’s just getting started on the day’s tweeting, though. There are more churning out as we publish.