Trump Spells Special Counsel Wrong For The Third Time in a Row… Is He F*cking With Us?

Trump – or his staff, who the hell knows anymore – seems to think that “counsel,” as in “Special Counsel Robert Mueller” is spelled “councel.”

And this is a newsflash Trump seems to have forgotten several times in the past few days, then remembered, and then tried to make sure nobody ever saw that he’d forgotten.

Exhibit A: A tweet written this morning about law professor Alan Dershowitz:

Alan Dershowitz, Harvard Law Professor: “It all proves that we never needed a Special Counsel….All of this could have been done by the Justice Dept. Don’t need a multi-million dollar group of people with a target on someone’s back. Not the way Justice should operate.” So true!

At this point, you have to think that Trump’s phone now thinks it is spelled “Councel” and just automatically inserts that. pic.twitter.com/KBf4uvfAyy

And again, not three days before, here’s the revised version:

The appointment of the Special Counsel is totally UNCONSTITUTIONAL! Despite that, we play the game because I, unlike the Democrats, have done nothing wrong!

He tweets about the special counsel almost every day and still can’t spell counsel. Councel isn’t even a word. pic.twitter.com/LAO782asmt

And AGAIN, just two days before THAT:

There was No Collusion with Russia (except by the Democrats). When will this very expensive Witch Hunt Hoax ever end? So bad for our Country. Is the Special Counsel/Justice Department leaking my lawyers letters to the Fake News Media? Should be looking at Dems corruption instead?

To err is human. To err three times in the exact same highly specific way in the span of a week calls to mind that infamous quote: “Insanity is doing the same thing over and over again and expecting a different result.”

Is this some sort of Shakespearean ploy to alter the course of the English language? Is this a Jedi mind trick? Or is this actually a guy sitting in the Oval Office tweeting something he’s been told twice before this week is wrong and just doesn’t give a crap?

Here’s the argument for door number two: Autocorrect doesn’t even let you write “councel.” It corrects to “council,” which still isn’t right, but at least it’s a homophone: 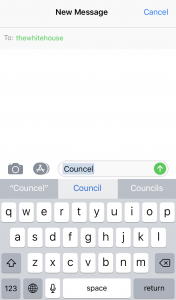 Which begs the question: are Trump’s aides just trolling all of us by glaringly misspelling this word and then correcting it for posterity? Are we all being distracted from the really, really troubling things Trump is saying by the errors in his tweets and then baited-and-switched with the correct spelling later on?

Are these the droids we’re looking for?