Trump Supporter: Christians Should Forgive Trump for Past Transgressions — But Not Clinton
Video

Trump Supporter: Christians Should Forgive Trump for Past Transgressions — But Not Clinton 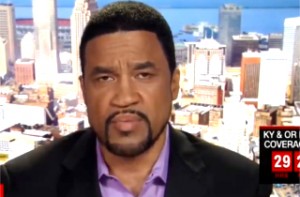 Speaking with CNN’s Carol Costello, Trump supporter and pastor Darrell Scott explained that principles of Christian forgiveness meant that Donald Trump should be forgiven for past transgressions. Bill Clinton, on the other hand, should not.

He continued: “What we once thought was intolerable has now become tolerable to the extent that its very hard to judge an individual because you don’t have a clear moral compass — I mean a clear compass as to what morality is these days.” Scott cited as an example of shifting morality, the fact that it is no longer acceptable to compliment a woman’s appearance.

The segment was a response to comments RNC Chair Reince Priebus made, accusing the Clinton camp of dredging up unsavory stories from Trump’s past.

Addressing the New York Times story about Trump’s history with women, Priebus said, “Look, I mean, these are things that he is going to have to answer for, but I also think there are things from many years ago and I think that, you know, as Christians, judging each other I think is — is problematic. I think it’s when people live in glass houses and throw stones is when people get in trouble. And so, you know, is Hillary Clinton — it’s a classic Clinton operation.  Now suddenly these things are coming out.  “

Costello pressed Scott later in the segment: “If Republicans can forgive Donald Trump’s transgressions, can they also forgive Bill Clinton’s past transgressions?”

Clinton, on the other hand, committed transgressions that were “inexcusable” while a public servant, namely using “his office as a bordello,” Scott said.

“Christianity is based upon forgiveness,” he added, invoking the apostle Paul. “Donald Trump was a different person then than he is now.” When asked about Clinton, Scott affirmed that the 42nd president got no such pass because then he was in public office.