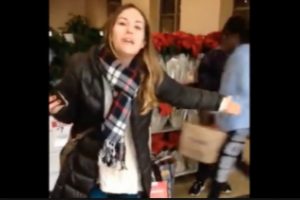 A Chicago shopper decided to announce her support for Donald Trump during an insane rant about how she was being discriminated against. The incident apparently happened after she was asked if she wanted a reusable grocery bag that she’d have to pay for.

The incident happened several days ago, at a Michaels store in Chicago.  Jessie Grady filmed a woman’s tirade while she shopped with her 2-year-old. Grady described it as a “30-minute racist rant complete with yelling and cursing and repeated references to the fact that both employees were African-American.”

“I voted for Trump, so there,” the woman shouted. “You want to kick me out for that? And look who won.”

As the rant continued, it became apparent that the shopper was angry when the store’s cashiers messed things up while bagging her items. The lady eventually accosted Grady when she noticed that she was being filmed.

“I was just discriminated against by two black women and you being a white woman and you literally thinking that’s OK…why don’t you go home to your husband who’s cheating on you.”

When Grady asked the woman why voting for Trump was relevant here, the lady complained about how “people are ganging up on me” and other Trump supporters across the country. The store manager approached the woman to ask for calm, and the Chicago Patch reported that the manager was African American as well.

“This woman screamed at me across the store like an animal…You’re an animal,” the shopper said. She went on to complain about “liberal lectures,” threaten a lawsuit against the store, and rave about how she’s a victim of “discrimination.”

Grady started a GoFundMe campaign on the managers behalf, explaining that she was hoping to brighten things up for her after she took the brunt of the tirade.

A similar incident happened recently when a Trump supporter went on a rant at Starbucks and said he was discriminated against for being white.