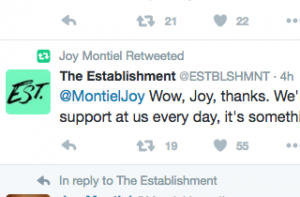 When you hear “the establishment,” you probably think of Jeb Bush or even Hillary Clinton. The term is a catch-all used when describing career politicians who are heavily involved in the D.C. scene. This election season, especially, voters have been rallying against the establishment and backing candidates like Donald Trump and Bernie Sanders.

Some people, however, hear “the establishment” and think of this website, The Establishment. They describe themselves as “a multimedia company run and funded by women that’s predicated on a simple, yet radical notion: the world is a better, more interesting place when everyone has a voice.”

Unsurprisingly, at least one person has heard “the establishment” in reference to the magazine and thought of corrupt D.C. pols and a callous disregard for the American people. Twitter user Joy Montiel actually took her signal-crossing so far as to begin tweeting at the publication’s account, believing them to somehow be the official account of establishmentarian politics. Here is her Twitter bio, for an example of what her daily output on the site includes:

we have taken enough crap, let’s take America back!!!! VOTE TRUMP! Liberal Scum has destroyed this Country!!!!! We have to take it back!!!!

She tweeted at them today and they finally had enough. Their reaction indicated that this wasn’t the first time:

@MontielJoy Wow, Joy, thanks. We’re so lucky you tweet your Trump support at us every day, it’s something special to look forward to.

After the magazine responded, Montiel kept it going:

@MontielJoy What? Do you know how twitter works? You’re yelling at a women’s magazine named The Establishment every day, not the government.

Then, it got good:

@ESTBLSHMNT OK now I feel stupid!!! I can not apologize enough! I won’t bother you again. Wow! I’m sorry

@ESTBLSHMNT I never heard of this magazine, I'll look it up.

Rarely on Twitter do we get to see someone who recognizes their mistake and apologizes, so this story has a happy ending for everyone.