Trump Up, Bush and Walker Down in First Big Post-Debate Poll
POLL

Trump Up, Bush and Walker Down in First Big Post-Debate Poll 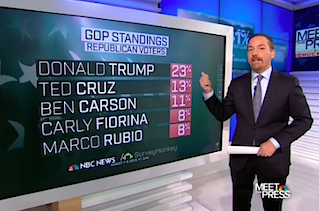 If you thought Donald Trump’s boisterous debate performance and subsequent comments about Fox News’ Megyn Kelly might hurt his standing in the polls, you might be very wrong.

In the first major poll to be released since Thursday night’s debate, NBC News and Survey Monkey found Trump holding onto his first place position with 23% of the hypothetical vote. Jeb Bush and Scott Walker, who were each at 10% in the same survey a week earlier, both dropped three points to 7% each, tied for a disappointing fifth place.

Ted Cruz saw the biggest post-debate bump, up seven points to 13%, putting him second to Trump. Carly Fiorina saw a six point bump to reach 8%, her highest position in any national poll to date.

Ben Carson came in third place with 11% in NBC’s poll, while Marco Rubio was tied for fourth place with Fiorina at 8%. However, a margin of error at 3.4% helps put these shifts in a bit more perspective.

Fiorina was deemed the winner of debate night despite not appearing on the primetime stage, with 22% of respondents saying she did the best job. And while Trump came in second place in that contest with 18%, he also topped the list of candidates who did the worst job with 29%.

Given the surprising results, some are questioning the poll’s methodology. Unlike most major national polls, this one was conducted entirely online, using a national sample of 3,551 adults aged 18 and over who were “selected from the nearly three million people who take surveys on the SurveyMonkey platform each day.” NBC’s Chuck Todd has responded to those on Twitter who are hesitant to believe the results:

@matthewjdowd @ron_fournier @SSmithNYC @NBCNews no. We simply are no long ignoring the multiple ways you have to do surveys now.

Watch Todd break down the numbers on Meet the Press below, via NBC: