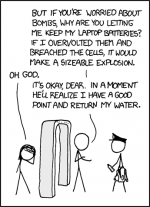 It’s a good week to hate on the TSA. After thanking God that would-be terrorist Umar Farouk Abdulmutallab failed in his attempt to blow up Northwest Fligth 253 on Christmas Day, the focus has shifted to the colossal, multiple failures of the system on that day (Flying even though he was on a watch list? Really? Flying without a passport? Really?) and to the ridiculousness of the so-called precautions that have made air travel more and more unpleasant over the past decade, yet clearly didn’t do much to stop this crazy dude.

First there is xkcd, that most beloved web-comic (and now book!) that deftly captures modern truths about “romance, sarcasm, math, and language” according to its tagline (i.e. pan-geekery). Randall Munroe‘s “Bag Check” comic is below, and tell me you haven’t wanted to do this about a zillion times before: 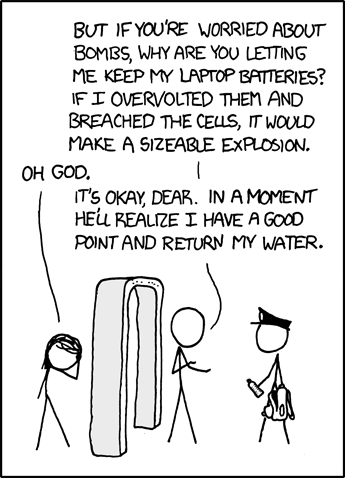 The TSA responded to this cartoon on the TSA blog in October, differentiating between computer batteries and a bottle of water thusly:

When you show us a bottle of liquid, we can’t tell if it’s a sports drink or liquid explosives without doing a time consuming test on it …Additional information on Lithium (laptop) batteries: They’re permissible in checked and carry-on luggage when they’re in the devices they are intended for. Spare batteries are not permissible in checked baggage, but they can be transported in your carry-on luggage if they are packaged properly.

Aha, so that’s the difference. (Commenters are fairly mocking on that point below the post, sometimes fairly, sometimes not.)

The mockery was taken a step further by the Atlantic’s Jeffrey Goldberg, though, in November 2008 in the epic TSA takedown piece, “The Things He Carried,” which was basically about how Goldberg and security expert Bruce Schnei­er tested the TSA by making attempts to carry through all manner of contraband on board, and by pushing it even further by falsifying documents and the like:

[B]ecause I have a fair amount of experience reporting on terrorists, and because terrorist groups produce large quantities of branded knickknacks, I’ve amassed an inspiring collection of al-Qaeda T-shirts, Islamic Jihad flags, Hezbollah videotapes, and inflatable Yasir Arafat dolls (really). All these things I’ve carried with me through airports across the country. I’ve also carried, at various times: pocketknives, matches from hotels in Beirut and Peshawar, dust masks, lengths of rope, cigarette lighters, nail clippers, eight-ounce tubes of toothpaste (in my front pocket), bottles of Fiji Water (which is foreign), and, of course, box cutters. I was selected for secondary screening four times—out of dozens of passages through security checkpoints—during this extended experiment. At one screening, I was relieved of a pair of nail clippers; during another, a can of shaving cream.

As we stood at an airport Starbucks, Schneier spread before me a batch of fabricated boarding passes for Northwest Airlines flight 1714, scheduled to depart at 2:20 p.m. and arrive at Reagan National at 5:47 p.m. He had taken the liberty of upgrading us to first class, and had even granted me “Platinum/Elite Plus” status, which was gracious of him. This status would allow us to skip the ranks of hoi-polloi flyers and join the expedited line, which is my preference, because those knotty, teeming security lines are the most dangerous places in airports: terrorists could paralyze U.S. aviation merely by detonating a bomb at any security checkpoint, all of which are, of course, entirely unsecured. (I once asked Michael Chertoff, the secretary of Homeland Security, about this. “We actually ultimately do have a vision of trying to move the security checkpoint away from the gate, deeper into the airport itself, but there’s always going to be some place that people congregate. So if you’re asking me, is there any way to protect against a person taking a bomb into a crowded location and blowing it up, the answer is no.”)

We took our shoes off and placed our laptops in bins. Schneier took from his bag a 12-ounce container labeled “saline solution.”

“It’s allowed,” he said. Medical supplies, such as saline solution for contact-lens cleaning, don’t fall under the TSA’s three-ounce rule.

“Bottles labeled saline solution. They won’t check what’s in it, trust me.”

They did not check. As we gathered our belongings, Schneier held up the bottle and said to the nearest security officer, “This is okay, right?” “Yep,” the officer said. “Just have to put it in the tray.”

“Maybe if you lit it on fire, he’d pay attention,” I said, risking arrest for making a joke at airport security. (Later, Schneier would carry two bottles labeled saline solution — 24 ounces in total — through security. An officer asked him why he needed two bottles. “Two eyes,” he said. He was allowed to keep the bottles.)

Owwwwch. Here’s Schneier’s response to what happened on Flight 253:

I said this in an interview with then TSA head Kip Hawley in 2007: “I don’t want to even think about how much C4 I can strap to my legs and walk through your magnetometers.”

And what sort of magical thinking is behind the rumored TSA rule about keeping passengers seated during the last hour of flight? Do we really think the terrorist won’t think of blowing up their improvised explosive devices during the first hour of flight?

For years I’ve been saying this: “Only two things have made flying safer [since 9/11]: the reinforcement of cockpit doors, and the fact that passengers know now to resist hijackers.” This week, the second one worked over Detroit. Security succeeded.

And then, to make us ALL feel safer, there’s his succinct comment to Reason a few months after the Goldberg article:

Airport security is a last line of defense, and not a very good one at that. We need to remember that at budget time.

Sigh. Let’s put that in context with this:

O-kay then! At the very least though, we can be an optimist, like Schneier:

Only one carry on? No electronics for the first hour of flight? I wish that, just once, some terrorist would try something that you can only foil by upgrading the passengers to first class and giving them free drinks.

Dare to dream. In the meantime, I’ve bookmarked Schneier on Security, and perhaps you should, too.