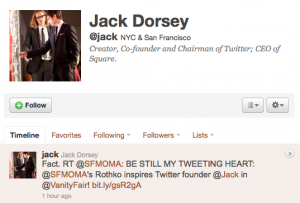 Jack Dorsey is quite possibly one of the most influential people in tech of which you’ve probably never heard. Dorsey, you see, invented a little ol’ social network called Twitter (Perhaps you’ve heard of it? It’s a great way to share thoughts, stay abreast of breaking news and creep out young actresses.) and is currently working on a new project, Square, which aims to change the way we make payments by allowing users to attach a device to their mobile phones, and then simply swipe a credit card to pay quickly and efficiently.

So why have you heard so little about this man who is one of the visionaries of the Digital Age? Why don’t you know that in 2000 he dropped everything to pursue a career in botanical illustration? Or that he studied for a year to become a certified massage therapist, or more recently took classes in fashion design (making an impressive pencil skirt), or has already set his sights on his dream job: mayor of New York City?

The magazine’s profile shows Dorsey to be an a quiet, press-shy, intellectually curious man (with a penchant for maps), utterly obsessed with the ways people communicate (and, um, the human clavicle). Twitter, for instance, is the result of Dorsey’s fascination with the way succinct way taxi cab drivers keep in touch with one another and with their dispatchers via radio.

Dorsey was formerly Twitter’s CEO, but was eventually pushed out after he was deemed to be a less than satisfactory manager. He does, however, remain a chairman and is the company’s second-largest individual shareholder.

It’s all refreshing to learn that, like nearly everyone, Dorsey had second thoughts about the course his life was taking:

Having second thoughts about programming once again, he enrolled in a fashion class at Apparel Arts, a trade school in San Francisco, and began designing and sewing clothing. “I was fascinated with jeans,” Dorsey explains, “because you can impress your life upon the jeans you wear. The way you sit imprints on the jeans.” It was another nod to the idea of maps. In the same way, botanical illustration, he points out, is the best method for rendering the details of a flower—nuances that even the best cameras can’t capture. And to properly do massage, Dorsey says, one has to map the contours of the body.

And, now, I will never sit down in a pair of jeans without thinking about Jack Dorsey. Can’t wait until Darren Aronofsky directs The Other Social Network, starring Andrew Garfield.