Twitter is Asking Why Trump is Wandering Around So Much 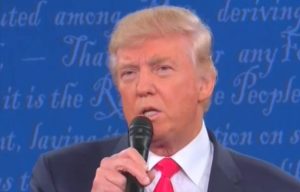 Twitter has taken notice of Donald Trump wandering around the debate stage.

Reaction is split between people who find this funny…

I can’t stop laughing at Trump just wandering around like a bored 5 year old.

I need someone to make a supercut of Trump wandering behind HRC set to The Police’s “Every Breath You Take.” #debate

Trump has no idea what to do a when someone else is talking. He is wandering around aimlessly. #debate2016 #debate #PresidentialDebate

Trump standing and wandering like a bored little boy

Trump wandering in the back of the shot when Clinton has taken is space is beautifully awkward. #Debates2016

Trump menacingly hovering behind @HillaryClinton, yelling at moderators, wandering around stage like he wants to flee. #truecolors #debate

The aimless wandering around the stage by Trump is making me uncomfortable ? #debate