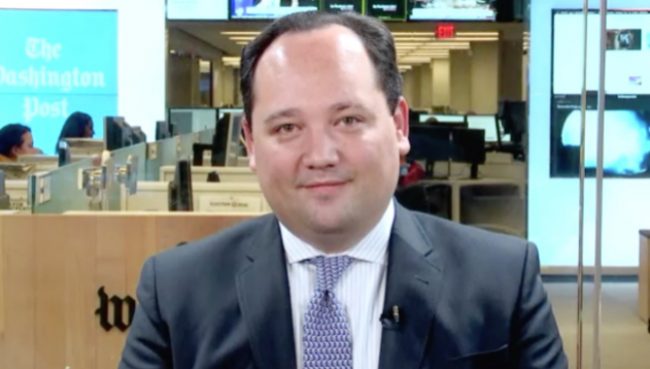 Philip Rucker is facing a ton of mockery for the way in which he reacted to President Trump‘s speech tonight.

As Trump announced his intent to deploy more troops into the war in Afghanistan, he issued a new call for unity while mocking Islamic terrorists as thugs and losers. Even though Trump used a teleprompter for this speech and didn’t clarify many details of his plans, the White House Bureau Chief for The Washington Post offered this tweet:

Tonight is a new President Trump: Acknowledging a flip-flop and talking about gravity of office, history & substance.

Um, Trump is reading words someone else wrote which he doesn't believe because he's outsourced policy making to the military. Not good. https://t.co/A4xenIMGL2

No, this is a dude reading a Very Serious Speech from a teleprompter. https://t.co/nvXzY33lbX

War and killing are the U.S. media's pornography. https://t.co/BGufr3cbSX

Me: How many times are you going to fall for it when your shitty abusive boo tells you he's sorry?
You: https://t.co/MJhfeAO2re

the president gave a detail-free speech on his mystery strategy for continuing a 15-year war, but, on the other hand https://t.co/L8zk4IBx5M

Lucy has a football for you to kick, Philip. Stop falling for this crap. Trump will make you eat this tweet very soon. "New Trump." Ha! https://t.co/URXCgIJYVp

Prediction: This is going to look really damn dumb after tomorrow's AZ rally to pardon a racist convicted sheriff. https://t.co/8KJEKDjKYv

How is it possible someone would still tweet this. https://t.co/XOjZS8xwHo

Wait for it…wait for it…Today Is The Day Trump Truly Became President. https://t.co/V0qxLuqnRM

.@PhilipRucker Dear friend: I am seeking to transfer funds to you. Please I will offer you 20% of the total sum USD4.2M for your assistance. https://t.co/fEiSpVM0vQ

Journalists are eternally desperate to normalize Trump, no matter how much evidence accumulates of his absolute unfitness. https://t.co/8qz3jTYgyG