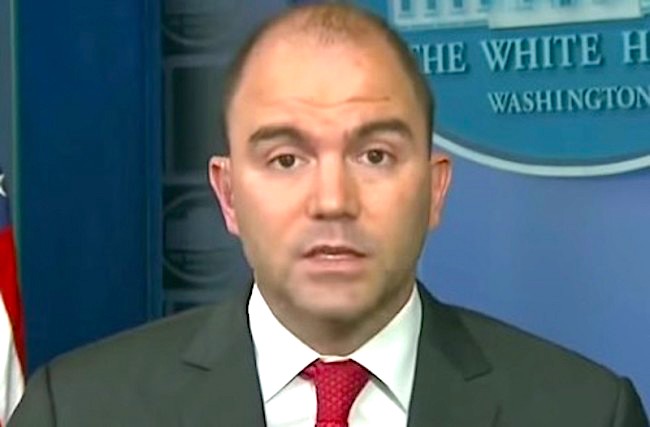 Former Obama national security spokesman Ben Rhodes is getting ripped to pieces online over a very unsettling remark he tweeted about the GOP leadership last night.

I hope this is the photo they use on the front page of the Times on the day Trump is indicted pic.twitter.com/mifuyBk6YY

Rhodes responded to this with an…eyebrow-raising comment about Paul Ryan, Mitch McConnell, and Mike Pence.

And alongside the obits for Ryan, McConnell, and Pence https://t.co/fOrm1JZwpu

As it were, there are quite a few people on Twitter who are not impressed with Rhodes for insinuating that he’s eagerly awaiting the day three of the country’s top ranking political officials drop dead:

Today in wishing death on your political opponents. https://t.co/Ftm4hCk1oe

Wishing death on your political opponents? You are truly the most disgusting people ever to have occupied the White House. Thank God @realDonaldTrump is undoing much of the damage you did. https://t.co/Wddftb7PYG

Wait. So you’re openly fantasizing about reading the death notices of Congressional leaders and the Vice President? Your respect for democratic norms knows no bounds. https://t.co/5v4gCcjrss

Merry Christmas and a Happy Hanukkah to you too!
WOW! https://t.co/Z6s9ha73zI

If a conservative had tweeted about wanting to see obituaries for the Vice-President and House/Senate leaders, it would be front-page outrage.

But since a former Obama staff member said it… ??? https://t.co/bR1qVq3cgl

Wow. Do you regret this @brhodes? Often I my show through the 8 years of President Obama’s tenure show I urged people to pray for safety and health of 44. This is shocking to ordinary Americans. https://t.co/9EQAIvhibG

So now the echo chamber is a death chamber. https://t.co/PHnhzcKfhH

And if the point wasn’t clear enough, here’s what House of Representatives Majority Whip and nearly-assassinated congressman Steve Scalise had to say:

You may want to reconsider your rhetoric. https://t.co/VQVWej6n00