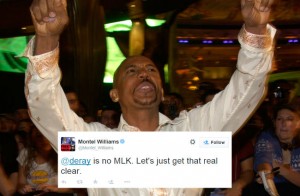 Montel Williams has been on a roll lately, what with his recent condemnation of Josh Duggar and his subsequent doubling-down on those initial comments. However, the talk show host put himself on Twitter’s shit list after he tweeted about civil rights activist Deray McKesson late Tuesday night.

The tweet in question attempts to rip apart the possible comparison between McKesson and Martin Luther King, Jr.:

@deray is no MLK. Let’s just get that real clear.

So did the King Center in Atlanta:

But @deray is a man of consciousness whose life is threatened daily because of his activism. He cares. We’re clear. https://t.co/6kimuoZ0mP

It is erroneous and contrary to Dr. King’s philosophy and legacy to use him to be divisive and destructive. #MLK — The King Center (@TheKingCenter) June 10, 2015

However, the best (and most creative) rebuttals to Williams’ troll-inviting tweet came in the form of the #MontelWilliamsLogic hashtag:

apple is no orange #montelwilliamslogic

Cake is no ice cream #MontelWilliamsLogic

Let this be a reminder that the Internet is wonderful. At least, when you’re not on the receiving end of its best (and worst) trolls.