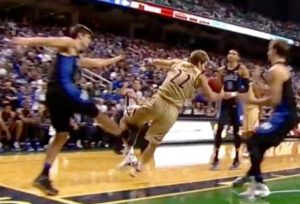 On Dec. 22, we posted about Duke guard Grayson Allen, who flagrantly tripped an opposing player for the third time in the 2016 calendar year. Shortly after our story went up, Duke coach Mike Krzyzewski suspended Allen from the team indefinitely.

Without Allen, Duke lost its conference opener against Virginia Tech on New Year’s Eve 89-75. Further, Krzyzewski is about to take a leave of absence from the team, as he undergoes back surgery.

Those factors were enough, evidently, for Krzyzewski to allow Grayson Allen to return to the Duke lineup after just one game.

“There are things behind the scenes that we are doing, and I think it’s appropriate what we’ve done,” Krzyzewski said, via ESPN.

Fans on Twitter thought Allen was let off the hook way too easily. Here’s a sampling of the public reaction:

It isn’t just Krzyzewski’s back that’s a problem. Given his pillow-soft punishment of Grayson Allen, so’s his backbone.

If #GraysonAllen would’ve made that layup while being fouled, he could’ve gone to the free throw line for an And-indefinite.

Coach K’s upcoming back surgery is going to be a challenge without a spine. #GraysonAllen

My mom put me in timeout for tripping my sister when I was 6 that was longer than Grayson Allen’s suspension ? @DTonSC

I’ve gone to the restroom longer than Grayson Allen was suspended. What was it 10 mins? Coach K should be a shame of himself #LAUGHABLE

Ooh. Grayson Allen back in Duke’s line-up after serving an indefinite suspension for tripping.

It was clear after Duke lost to Virginia Tech that Duke…er, Grayson Allen…had learned its lesson. #bbn https://t.co/Qi5tSC60wm

Did you REALLY think Grayson Allen was going to have a lengthy suspension? You must be trippin’.

Grayson Allen is back, but the Warriors blew a 3-indefinite lead in the NBA Finals.

Grayson Allen’s “indefinite suspension” w/Duke is over after 1 game, but, hey, it has been a year since he played

With Allen back on the floor, Duke beat Georgia Tech on Wednesday night 110-57.