Uniform Disgust: Rachel Maddow Agrees With Fox And Friends On What US Olympic Athletes Wear
video

Uniform Disgust: Rachel Maddow Agrees With Fox And Friends On What US Olympic Athletes Wear 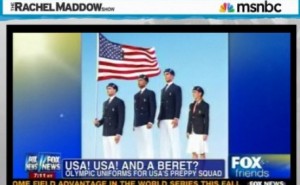 On Thursday night’s edition of The Rachel Maddow Show, host Rachel Maddow gave viewers a little taste of what they could expect to watch all freaking day on cable news today, the near-universal (if the Universe were confined to the United States) revulsion at the fact that the US Olympic team’s opening ceremony outfits were made in China. Rachel calls this moment of unity the “Best New Thing In The World Today,” but frankly, it just annoys me.

Is there a certain Kum Ba Yah novelty to an issue that unites Rachel Maddow with Fox and Friends, Democratic Senate Majority Leader Harry Reid with Republican Speaker of the House John Boehner? Sure, but this is such a fish-in-a-barrel issue that I’m having trouble getting worked up about it. That the US Olympic Committee should have ensured that the uniforms were made in America is a no-brainer. I’d much rather we all agree that people shouldn’t get sick and die because they don’t have insurance, no matter the cost, or that an American’s right to vote is worthy of extraordinary protection, and that those who seek to interfere with it should have to meet an extraordinary burden.

But I get it, there’s always something more important we could all agree on. I’m sure conservatives wish we could all agree on universal handgun ownership, or compulsory abstinence education (or is that absence from education?). My biggest gripe with this brouhaha is that the outrage is entirely misplaced.

Yes, the uniforms should have been made in the USA, but the real outrage here is that our world class Olympic athletes are being asked to represent their country dressed like rejects from the Doctor Evil page program. Are they trying to win medals, or delivering interoffice mail in an underground lair?  Wherever the uniforms get made, can’t we all agree that they should also look American? It doesn’t have to be Levis and a cowboy hat, but they shouldn’t look like they’re on the way to a job interview at Blofeld/Goldfinger, LLC.

If you just have to put them in suits, think of the intimidation factor, and dress them all like the cast of Reservoir Dogs. With flag pins. When the other athletes see these uniforms, all it’s going to make then want to do is stuff our team into a locker at Hogwarts.

Finally, and most importantly, I get that it’s mid-July, and 24 hours is a lot of time to fill, but do we really have to hear about this all…freaking…day? It’s not like the uniforms were Made in China by Mitt Romney. Isn’t there a shark attacking a bear somewhere?