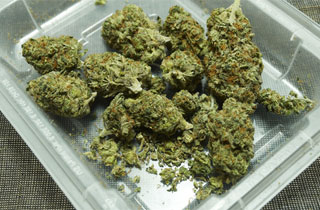 Well, that’s one way to deal with a coke habit: a Uruguayan official told the UN last week that they wanted to start experimenting with marijuana as a way to treat its prisoners suffering from cocaine addictions.

It’s a bit of a desperate measure: Uruguay is in the midst of a decade-long cocaine epidemic in the form of paco, an extremely cheap form of cocaine also known as pasta, which affects nearly 1% of the country’s 3.3 million population. The drug became widely available through illegal markets during the Argentinian financial crisis in 2002, and currently affects most South American countries.

However, the Uruguayan government is also heavily invested in rehabilitating those affected by the drug, and “jail is not a very suitable place for someone to safely overcome drug addiction,” public health sub-secretary Leonel Briozzo told the UN.

While it’s a counterintuitive way to deal with drug epidemics, Uruguay is in a unique position to test the theory: it recently legalized marijuana, partly to provide a safer alternative to paco. (It also attempts to undercut the illegal drug trade. High Times notes that while there isn’t much research into whether marijuana can actually cure addicts, “members of the International Drug Policy Consortium say the marijuana method is not about pot taking the place of harder, more dangerous drugs, but rather to help alleviate some of the anxieties associated with withdrawals.”

“The United Nations are very old-school trying to yank on our ear about this.” Implicitly referencing George W. Bush’s Iraq adventure, he said with a touch of sarcasm: “Well, we will be paying them just about as much attention as the Great Powers do when they make decisions regularly” against UN policy. He pledged: “We are going to win this one, by showing the road to reform.”