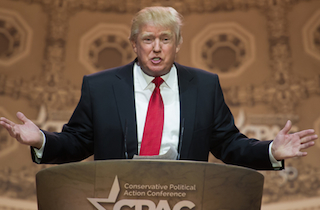 CPAC announced Friday morning that quadrennial candidate-tease Donald Trump will speak at its convention at the end of the month, an awkwardly-timed development that comes on the same day as a poll showing Trump with atrocious approval ratings among base conservatives.

But what could be far more injurious for the party is Trump’s views on the discredited link between vaccines and autism.

Vaccines became a surprise problem for GOP candidates this week after New Jersey Governor Chris Christie said parents should retain “some measure of choice” about certain vaccinations, comments then double-downed upon by Senator Rand Paul (R-KY), who said most vaccinations should be “voluntary.”

Until then anti-vaccination sentiment had been something of a bipartisan fringe hobby. Its sudden emergence as a wedge issue in the 2016 GOP field forced Republican leaders of all stripes to go on record as pro-vaccine, a view with overwhelming bipartisan support.

But not Trump. Last September the voluble plutocrat went on a tweetspree about the long-discredited link between vaccines and autism:

I'm not against vaccinations for your children, I'm against them in 1 massive dose.Spread them out over a period of time & autism will drop!

So many people who have children with autism have thanked me—amazing response. They know far better than fudged up reports!

Trump’s inclusion as a speaker at CPAC comes just as the GOP wants as far away from this issue as possible. Instead, they just brought on its loudest ambassador.