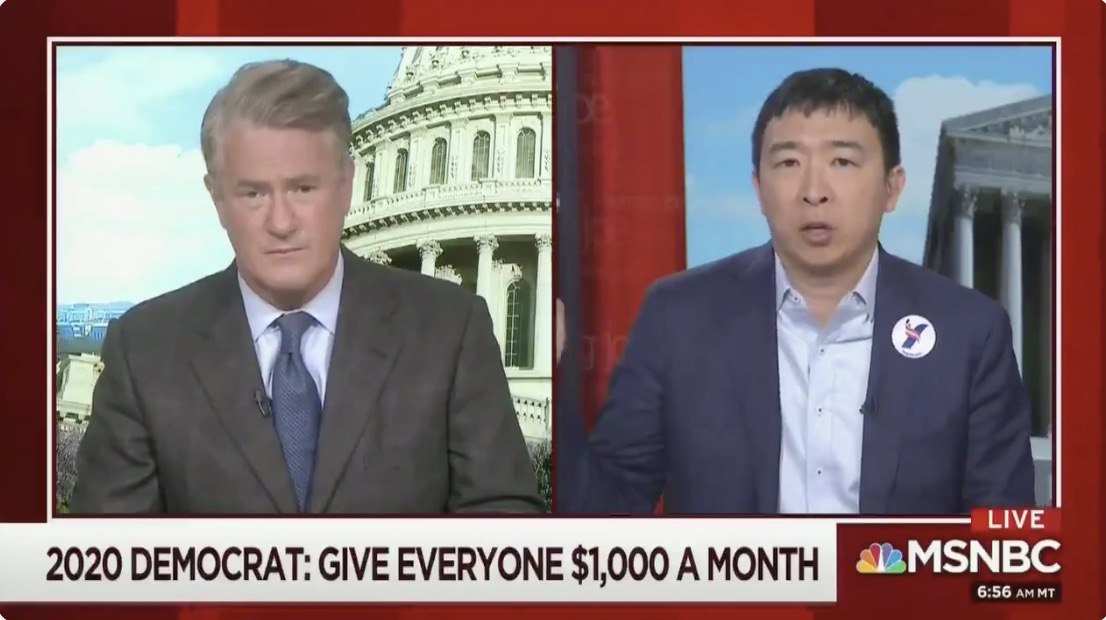 Andrew Yang, a businessman and 2020 Democratic presidential candidate, has taken a unique path toward advertising his platform: by engaging tech nerds, online gamers, and social media fanatics. Speaking to MSNBC’s Joe Scarborough this morning, Yang proposed giving every American $1,000 per month and having big tech companies like Amazon and Google pay for it.

Presidential candidate @AndrewYangVFA wants to give every American $1,000 a month.

He says he'll pay for it by taxing @amazon

"It's about 1.8 trillion," he said. "We need to pass a value added tax that would get the American people a slice of every Amazon transaction." pic.twitter.com/6lV1wox4Qq

“It’s about $1.8 trillion a year past current expenses,” said Yang, who said it was notable that Amazon paid no taxes last year while collecting over $230 billion per year in revenue and creating a monopoly over 30 percent of American malls.

“We need to pass a ‘value-added’ tax that would give the American people a slice of every Amazon transaction, every Google search, every robot truck mile,” said Yang.

The Democratic presidential candidate said that, under his proposal, the money that will be taxed on big tech companies would then be spent by Americans in their local communities and help increase cash flow while reducing massive costs related to incarceration and poverty assistance programs. Sunday night, Yang told his Twitter followers that as president he would “make Tax Day a holiday,” allow Americans to choose where 1 percent of their taxes are allocated, and show citizens a video of where their tax money is spent.

“Running the government like a business is nonsense. They are two very different things. But one thing that the government can learn from businesses is that businesses don’t treat their customers like crap. And our government treats us like crap on Tax Day,” Yang told a podcaster.

I would make Tax Day a holiday, allow citizens to choose where 1% of their taxes go, and make it a celebration. Show a video of where your money goes and thank you. Citizens deserve to be more involved and appreciated. pic.twitter.com/KNc3JzDjm8

“Citizens deserve to be more involved and appreciated,” he tweeted.