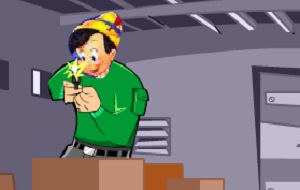 The long national nightmare has come to an end. President Obama‘s unremarkable, unimpeachable remark that he enjoys skeet-shooting at Camp David so nonplussed Washington Post fact-checker Glenn Kessler that he could not believe the President’s own words, or even his own eyes. On Monday, Kessler finally found a source that trumped President Obama’s word, and the array of facts in the President’s favor, and even the photographic evidence that the White House provided. Kessler cleared President Obama of being a “self-aggrandizing” liar on the basis of an anonymous Fox News source.

In the week after President Obama told  New Republic editors Chris Hughes and Franklin Foer, when asked, if he had ever shot a gun, that “Yes, in fact, up at Camp David, we do skeet shooting all the time,” journalists from CNN and The Washington Post strongly suggested that the President was lying, and that the only way to clear him of that charge was photographic evidence of activities which have empirically been demonstrated as rarely photographed. When the President met this newly-established “journalistic” standard, that still wasn’t enough. So, what finally tipped the scales? From Fox News’ Jana Winter:

“The only time he shot skeet was for President’s Cup,” said the source, referring to a shooting competition tradition involving the presidential Marine guards. “I was there. He stayed for about five minutes, and couldn’t leave fast enough.”

Skeet shooting “is very hard,” said the source. “Especially for someone not used to guns … He couldn’t have been more uncomfortable.”

The source said a friend of his recalled Obama skeet shooting one other time at Camp David — very early on in his first term.

That’s right, according to Glenn Kessler, this report, in which an anonymous source still says the President is lying, settles the matter:

Here’s hoping that award is round, and made out of clay. Kessler already had the photo and the AP report with the quote about the President practicing with the Secret Service, so the tipping point was this single anonymous Fox News source. Doesn’t make sense, does it?

It makes more sense that Kessler realized he was being clowned by his wingnut readers, and needed to save face. Maybe he can produce a photograph of his giant floppy shoes.

Kessler defends himself by noting that President Obama “made an unexpected claim” (what, exactly, is an “expected claim?”) when he honestly answered a question that was asked of him, but neither he, nor the others who have justified accusing the President on this basis, have bothered to explain why they made absolutely no demands on Vice President Joe Biden, when Biden volunteered an identical claim at a meeting of gun owners just days earlier. Isn’t there an audience for that kind of journalism, too?