WATCH: Airport Protests Grow at Int’l Airports With Cries of ‘SHUT IT DOWN!’ (UPDATED)

At international airports across the country today, scores of protestors have gathered with signs and chants in direct opposition to the newest executive order on immigration by President Donald Trump.

The executive action, signed Friday afternoon, took drastic steps in curbing immigration in Muslim-majority countries; it officially suspended the entry of refugees into the United States for four months, and all Syrian refugees are barred indefinitely. The response has been swift, with large crowds beginning to gather at New York City’s JFK Airport before spreading to airports around the country.

Currently at JFK, eleven men are being detained despite landing in the United States with travel visas and green cards; the Muslim men are being held in Terminal 4 of the international airport, which is where thousands of people have gathered throughout the day. One detainee from Iraq — Hameed Khalid Darweesh, who helped the U.S. military as an Iraqi interpreter — was eventually released.

Take a look at some of social media’s images and videos at airports around the country. 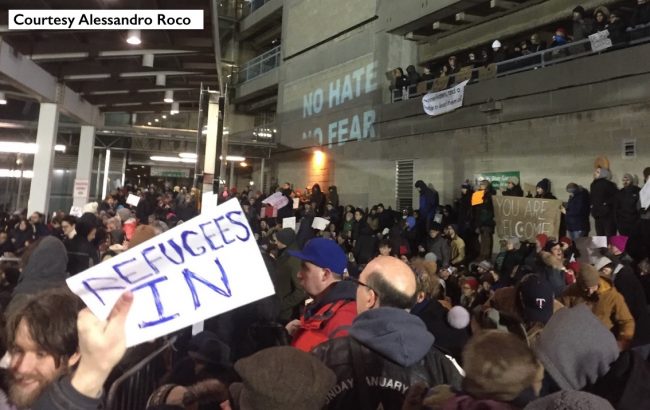 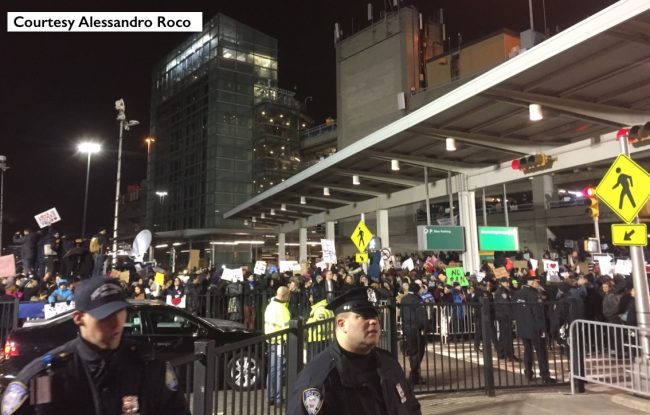 NYPD now preventing people from accessing the train from subway to #JFKTerminal4 pic.twitter.com/4anAdlpNzw

And JFK is not the only airport where crowds have gathered; liberal filmmaker Michael Moore among others has been using his wide-reaching social media feed to encourage scores of protestors to gather at their closest international airports to speak out against “this bigot.”

Show of solidarity at SFO ✊?✊?✊? pic.twitter.com/Vcq7Vrh9IO

Azam landed at IAD from Iran. She has a green card. She says she was ? for 4 hrs before being released. She’s visiting her daughter Ellie. pic.twitter.com/pqZ22Vwoww

Protestors are now marching outside of O’Hare’s Terminal 5 pic.twitter.com/KRvPID6g7m

Marching out of O’Hare pic.twitter.com/zxBZsjQtKV