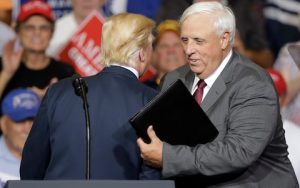 The results of the presidential election for the Democratic party were disastrous, but one thing the party can’t forget is that it’s also losing on a state level — and badly. Which is why West Virginia Gov. Jim Justice‘s decision to not only change parties but declare for President Trump at a Thursday rally was particularly alarming to many.

“Today I will tell you with lots of prayers and lots of thinking, I’ll tell you West Virginians, I can’t help you any more being a Democrat governor,” Justice said.

“The Democrats walked away from me,” the governor argued, and reflected that his late mother, who was a big fan of former President Ronald Reagan, was looking down on him thinking, “Jimmy, it’s about damn time you came to your senses.”

Losing a Democratic governor isn’t a good thing by any stretch of the imagination, but for progressives who want the party to move left and are concerned about party leadership poising itself to throw core progressive values under the bus in a shortsighted ploy for votes, losing a conservative governor like Justice is a victory.

Justice, formerly a coal mine and agriculture businessman, has said he respects that abortion rights are the law, but has a record of signing off on stringent restrictions as West Virginia’s governor. He is also a climate change denier, telling the Charleston Gazette-Mailer in 2016, “I surely wouldn’t sit here and say I am a believer in global warming, but I wouldn’t sit here and say that I am not concerned.”

It’s actually a good thing for Democrats who are fed up with watching the party try to normalize extremist stances on abortion and opposition to things like a higher minimum wage, safer gun control laws, or investing in public education and health care, to weed out people like Justice who oppose these principles.

Supporting people like Justice just because he identifies himself as a Democrat served to hold the party to the center, even move it to the right, and by saying that it’s OK for Democrats to be like this and support policies that hurt women, low-income and vulnerable Americans is going to do nothing but hurt those Americans — and hurt the party, in the long-run. The way to win elections isn’t to compromise on core principles, human rights, and policies meant for the betterment of the marginalized — it’s to get on the ground, mobilize, and use outreach and education to send people who haven’t been voting to the polls for you.

It’s better to weed out “Democrats” like Justice than to normalize his policies which are by-and-large harmful to most of the base, and work harder in the future to replace people like Justice with Democrats who will actually serve the party’s agenda.

At the end of the day, what you call yourself — a Republican or a Democrat — means something, that’s for certain. But it doesn’t — or, at least, it shouldn’t — mean more than the values you hold and the policies you fight for: reproductive rights, a higher minimum wage, health care, affordable education and housing, all of it.