What the Hell is Going on with Sean Hannity and the Nutty Seth Rich Conspiracy Theory?! 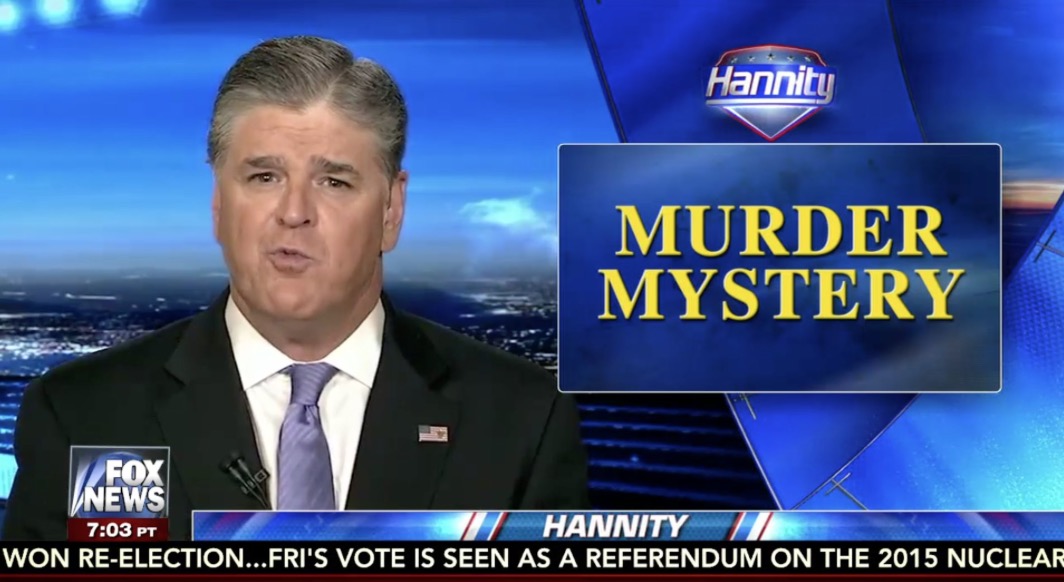 I despise nonsensical conspiracy theories. In fact, despite the fact that morons often confuse some of my contrarian opinions with conspiracies, I am a strong anti-conspiracy theorist. I simply believe that human beings are very poorly designed to engage in large schemes, especially in this era of social media where nearly everyone has a recording device on them at all times.

But even for those who also disdain these nutty theories, the insane narrative currently being promoted endlessly by Sean Hannity on radio and television regarding murdered DNC staffer Seth Rich being the REAL source of the WikiLeaks hacking should earn a special place of scorn. Sean Hannity is blatantly lying to his audience, against the wishes of a grieving family, all so he can score points with the Trump Cult in a way which might convince them that the whole Trump/Russia story really is “Fake News.”

It should be noted that Hannity is hardly alone at Fox News in engaging in this disgraceful behavior. Newt Gingrich did so on Fox News yesterday using completely debunked information and Fox & Friends has also tried desperately to make this pig fly. Julie Roginsky deserves credit for being a voice of courage on Fox News decrying this insanity (though not calling out Sean Hannity).

However, there is no doubt that Hannity has been leading this nutty charge and has promised a bombshell guest (someone with zero credibility) on his shows today to presumably prove his nonexistent case. Last night on Twitter he was actively mocking those who were criticizing him for engaging in obvious (to almost everyone but him) buffoonery.

The “theory,” as best I can tell, is that, since the police have yet to find the culprit (I’m sure the police are also in on the conspiracy to protect the now powerless Hillary Clinton) Rich was murdered because he was the REAL source of the DNC emails which WikiLeaks used to disrupt the election. Forgetting for a moment that there is absolutely no evidence of this when there should be TONS of it by now, this brainfart doesn’t even make any sense on its face.

Let’s pretend that’s what really happened (LMAO). What exactly would be the motive for murdering Rich in the middle of a presidential election which you were widely expected to win?! So you are going to kill someone because they have created a political headache for you even though murdering them would obviously be a 10,000 times larger and more damaging scandal if it was ever found out?

Seriously Sean? I doubt even you are dumb enough to really believe that.

Then there is the question of why there is no damn evidence for this “theory” when, given the nature of the allegation, there should be plenty of it. Remember, this story is all about emails. All it would take is even ONE remotely nefarious email connecting Rich to WikiLeaks to become public and even I might at least entertain the idea that maybe every one of our intelligence agencies, who are sure Russia was behind the hacking, might be wrong.

However, that has not happened, even though, if it was true, WikiLeaks could literally prove it instantly. The Trump/Russia/WikiLeaks apologists of course claim, laughably, that this would go against their code of honor to not divulge their sources and that is why no evidence has been revealed (how convenient!).

First of all, WikiLeaks routinely commits major crimes on a regular basis, so don’t give me this bologna about them needing to protect their source in this VERY unique situation. Rich is obviously dead, his murder is unsolved, WikiLeaks (in an incredibly cynical move intended to dupe morons they knew would take the bait) has even offered a reward for information solving the murder. If WikiLeaks really wants his murder solved (they definitely don’t) then it is obvious that they should provide information regarding their contact with him, which was presumably the motive for the attack.

But they will never do that, because such evidence doesn’t exist and a connection to WikiLeaks is clearly NOT why Rich was killed. As to why he was really killed, I have no idea. I agree the circumstances surrounding the incident are a little weird, but often strange things simply happen in real life. Rich’s is hardly the only unsolved murder, especially committed at 4 am, in the nation’s capital.

The reality is that WikiLeaks and Russia have a huge incentive to give life to this ridiculous conspiracy theory, which is why it is stunning to me that even Trump Cultists would be stupid enough to fall for their obvious head fakes. WikiLeaks offering a reward was the equivalent of O.J. Simpson doing the same for some unsolved murder that might have had a theoretical connection to those which he obviously committed. Russia tweeting about this conspiracy is classic trolling which should be a source of humiliation for a former conservative like Hannity, though sadly he clearly no longer possesses the ability to feel embarrassment for doing anything which he thinks helps his God King.

If none of this has yet convinced you that this is all a big lie, then simply put yourself in the position of Rich’s family, which has made it abundantly clear that they know this is all bullcrap and they want it to stop. What would be their incentive to not want justice for their family member? If they had even a hint of suspicion that the DNC could even possibly be behind his murder they would obviously not be responding the way that they are (partly because proving such a thing would be incredibly lucrative for them).

The bottom line is that the family knows that this didn’t happen because it obviously didn’t, and Sean Hannity has become a complete joke who is in total meltdown mode over the fact that his hero, who he helped elect, has turned out to be a truly horrible president.