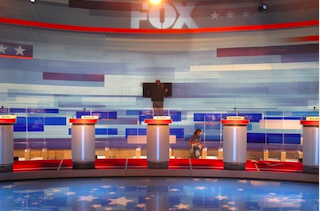 The headline may read “Trump Widens Lead,” but the biggest implications of Monday’s new Monmouth University Poll have much more to do with the candidates towards the bottom of the list.

With Fox News just a little more than 24 hours away from announcing the 10 candidates who will have the honor of appearing on the primetime debate stage in Cleveland, three Republican governors are vying for the bottom two spots.

As of last Thursday, some predictors had Rick Perry as the eleventh name on the list, while others were predicting that current Ohio Governor John Kasich would be left out of the debate in his home state. The third man on that list, Chris Christie, has been acting very confident, but still risked getting cut if he had a particularly bad performance in any new polls.

Assuming Fox decides to take the Monmouth poll into consideration, Christie should be resting easy right about now. With 4.4% in today’s survey, Christie tied Rand Paul and Marco Rubio for seventh place. They are followed by Kasich with 3.2%, while Perry’s name appears even further down the list with just 1.8%. That puts Kasich at #9 and Christie at #10 on Real Clear Politics’ average, both ahead of Perry, who still sits at #11.

If this ends up being the final major poll to be released before Fox announces the 10 candidates Tuesday evening, it is bad news for Perry. In order to avoid what is looking like an inevitable fate, he would have had to outperform Christie and Kasich. Instead, he couldn’t even beat Carly Fiorina, who is already not expected to appear on the main stage.

And yes, as Monmouth’s press release revealed, Trump has opened up his widest lead yet, more than doubling any other candidate with 26%. Jeb Bush (12.2%) and Scott Walker (11.1%) have to settle for second and third place, respectively. While Perry likely won’t get the chance to challenge Trump directly Thursday night, his two closest rivals will be looking to do something — anything — to improve their standing moving forward.