When is the NFL Going to Do Something About All the Fan Fights at Their Games? 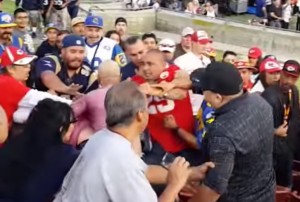 On Wednesday, the The Big Lead posted footage of a fan brawl that took place in the parking lot of MetLife Stadium in New Jersey following last week’s preseason game between the New York Giants and the New England Patriots.

The video below, via YouTube user WeLikeToHike, shows several people wailing on rival fans, some of whom are on the ground or have their back turned.

This incident follows a melee earlier in the preseason at the LA Coliseum during the game between the Rams and the Cowboys. That brawl took place high up in the stands. One fan was thrown over one row of seats, and very nearly tumbled down multiple rows.

A quick search of YouTube reveals that those two fights were not the only instances of violence during this preseason. And those were just the incidents that were filmed.

Of course, this is hardly a new phenomenon. Fans have been fighting in the stands and the parking lots of NFL stadiums for many years.

Teams have taken certain measures to try and curtail fan violence. At MetLife Stadium, where the Giants-Patriots melee occurred, alcohol sales are cut off at the beginning of the third quarter. And fans “exhibiting visible signs of impairment” are denied entry, according to MetLife Stadium policy.

But obviously, these measures aren’t enough. More needs to be done. People could get seriously hurt.

Adding security would help. In the video of the Giants-Patriots fight, 45 seconds elapse before security personnel become visible in the footage. The brawl happened right outside the stadium entrance. It should not take 45 seconds for security to arrive. This is not meant as a criticism of hard-working security personnel. But if they can’t respond to a situation like that in 45 seconds, they are clearly short-handed.

Cutting off beer sales at the start of the third quarter is good. Cutting them off before halftime would be better. But that would significantly impact the bottom line, which means it’s highly unlikely to happen.

The main issue here is pregame tailgate. Fans spend hours in the parking lot before game time guzzling booze. It’s out of control. And it’s leading to incidents like those referenced above.

Scientific estimates testing people on blood alcohol are showing that over 5,000 people are leaving the stands of an NFL game legally drunk. If they tailgated before the game, they’re 14 times more likely to be legally drunk over the .08 level.

Those statistics might be outdated, but they convey the danger of the pregame tailgate. Fans drink for hours and hours before game time. And with the specter of pricey beers and stadium limits hanging over their heads, many fans rush to down moderately priced booze they bring from home before kickoff.

Banning alcohol from the pregame tailgate might once have seemed like an extreme measure. It no longer does. Not when incidents like these continue to take place.

Responsible fans will lose out. They always do. But it doesn’t matter. This cannot continue.

The most chilling sequence of the fight after the Giants-Patriots game happened at the :39 mark. A man in a Giants jersey threw a series of vicious right hands at another man who was lying on the ground. A woman in a Patriots jersey tried to pull him off.