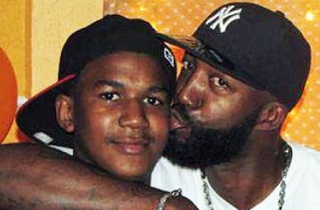 The editorial hook for Rolling Stone‘s much-discussed cover story on Boston Marathon bomber Dzhokhar Tsarnaev was ably summed up by the Morning Joe crew, Thursday morning, as an examination of how someone with a “look” that is so “connect(ed) with the fabric of American society” could turn out to be such a monster. That premise, and the timing of this issue of Rolling Stone, got me wondering how the magazine had treated the flipside of that coin, the tragedy of a kid whose looks connected with something in the fabric of America that led him to be treated as a monster, when he wasn’t.

Rolling Stone‘s editors, in defending their most recent cover, explained that “The cover story we are publishing this week falls within the traditions of journalism and Rolling Stone’s long-standing commitment to serious and thoughtful coverage of the most important political and cultural issues of our day. The fact that Dzhokhar Tsarnaev is young, and in the same age group as many of our readers, makes it all the more important for us to examine the complexities of this issue and gain a more complete understanding of how a tragedy like this happens.”

That description applies doubly to the story of Trayvon Martin, an “important political and cultural” story about a person who was “young, and in the same age group as many of (Rolling Stone‘s) readers,” and given the attention being paid to that young man’s death this week, in the wake of George Zimmerman‘s murder acquittal, a much more topical story for the magazine to cover. Maybe they’ll get to it in their next issue, but this important political and cultural story has been an intermittently hot topic for a year-and-a-half now. Here’s how the magazine treated the death of Trayvon Martin since his death on February 26, 2012.

As you can see, not only has Trayvon Martin never been featured on the cover of Rolling Stone, his story received not even a single mention on the cover. The closest they came was a descriptive blurb on the murder of Jordan Davis (without mentioning Davis by name), the 17 year-old Florida boy who was gunned down when a 45 year-old white man started an argument over loud music. The magazine has long faced criticism over its treatment of black musicians, and from the look of things, not much has changed. Despite the influence of black artists in popular culture, 28 of the 35 covers since Trayvon’s death have featured white people, and two of the others were of President Barack Obama, while two more featured Whitney Houston and The Notorious BIG. If you’re not dead or President of the United States, then your chances of being black and making the cover of Rolling Stone are bleak. If you’re a Caucasian terrorist, however, you’ve got an even chance with famed rock icon Mitt Romney. The magazine remains the journal of benign white supremacy, a reflection of a culture that feints at diversity, but settles to the level of its dominant majority.

Rolling Stone‘s fascination with the Boston bomber provides a poignant illustration of Trayvon Martin’s alienation from the culture that the magazine claims to care deeply about completely understanding. Their cover story is based on the premise that the Boston bomber looks like “one of us,” which apparently led friends and acquaintances not to suspect him. In fact, if you recall, there were several “dark-skinned males” who were suspected before the Tsarnaev brothers were identified. How could everyone have been so wrong about Dzhokhar Tsarnaev? He looks like one of us, the “fabric of America.”

But Trayvon Martin’s face is also part of the fabric of America, a face that was stitched, forcibly, into that fabric generations ago, yet remains relegated to a fraying seam. Despite a years-long connection to the Retreat at Twin Lakes, Trayvon Marton was not considered a part of that community by George Zimmerman, he was considered a suspect. Zimmerman’s attorney even explicitly explained that this was because of the way Trayvon Martin looked, because he was a young, black male. American, but not the kind of American that Dzhokhar Tsarnaev was, the kind who would shock you into putting him on a magazine cover when everyone turned out to be wrong about him.

The years Trayvon Martin spent visiting his father at The Retreat at Twin Lakes counted for nothing in the end, and in death, America has become an even less hospitable home to Trayvon, and others like him. The idea of profiling young, black males has graduated from firing offense to legitimate viewpoint/government policy, even as their ability, and that of their allies, to do anything about it is under relentless attack. It’s hard to stand your ground when your ground can’t stand you.