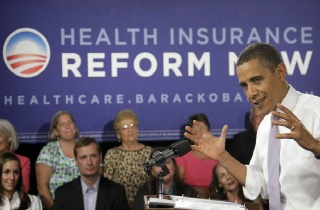 Appearing on MSNBC on Tuesday, White House health care adviser Phil Schiliro asserted that the White House never had a target number of Affordable Care Act enrollees. The widely circulated figure of 7 million – a figure which has been cited and repeated regularly by the press and members of the administration, was never their number, Schiliro asserted.

“That was never our target number,” he insisted. “That was a target that was put out by the Congressional Budget Office and has become the accepted number.”

He should have informed Health and Human Services Sec. Kathleen Sebelius of this development. Washington Times reporter David Sherfinski notes that Sebelius said “7 million is a realistic target” in June. She repeated this claim in an interview with NBC News in last September. “I think success looks like at least 7 million people having signed up by the end of March, 2014,” Sebelius insisted.

Indeed, the White House has been laying the groundwork for the dismissal of the CBO’s projected enrollment floor, at which point the ACA would be financially stable, for months. In late November, the Washington Post’s Ezra Klein and Sarah Kliff, two preferred channels through which the administration funnels information about the ACA’s ever-shifting mandates and deadlines, reported that the 7 million mark was never a White House target.

According to Klein, the White House has their own metric to determine the success of the ACA — the mix of enrollees:

Back in July, when Sarah Kliff and I asked the White House how they defined “success” in 2014, they always defined it as a function of the mix of people in the exchanges — the “ratio” — rather than the number of people in the exchanges. On this, the administration was clear: More wasn’t necessarily better. Twenty million enrollees would be a disaster if only 1 million of them were young and healthy.

If this is the new metric, the White House and the Department of Health and Human Services should be compelled to provide statistics establishing precisely just how successful the ACA has been at enrolling the appropriate mix. As it stands presently, the information available to the public indicates that the optimal blend of healthy and risky insured is a long way off.

“The administration hasn’t released a breakdown of who is enrolling, but preliminary data coming out of the state-run exchanges indicates a large number of high-risk consumers,” The Hill reports.

“I don’t see how they could have the balanced risk pool that they need,” said Joe Antos of the conservative American Enterprise Institute. “The younger people with lower incomes already have education loans, car loans, and such, and these are people who, even with a generous subsidy, it’s still going to cost them money out of their pockets.”

Based only on their past behavior, one gets the impression that the White House will refrain from releasing their own statistics regarding the health status and ages of enrollees until those figures can be positively spun. If that moment never arrives, the White House will simply claim that they were never were especially concerned about the mix of enrollees. And this insult will be happily endured, as have been so many others, by the majority of political media outlets.

The White House will continue to claim that the ACA is a success right up until the moment it becomes insolvent. Even then, Wonkblog will likely reveal that solvency was never the White House’s goal.