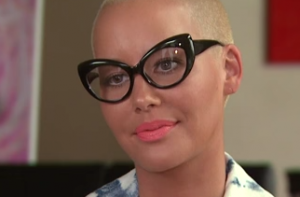 Amber Rose is a lot of things. She is an author, she is an outspoken feminist activist, she is a mother, and she is a model, for starters.

VH1’s general manager, Chris McCarthy, has noticed those things, too, as evidenced by what he told the Hollywood Reporter:

Amber has inspired millions of young women by overcoming homelessness to become a wildly successful entrepreneur. A true multihyphenate, she is a devoted mother, a strong advocate for women’s rights and a celebrated author all of which make her an ideal host. Amber is a perfect addition to the VH1 family because our audience is interested in hearing unique perspectives from those who are unapologetically themselves and not afraid to take a stand on issues they are passionate about.

That’s right! Muva Rosebud is getting her own late-night talkshow and it is going to be produced by Dr. Phil McGraw. With the op-ed that appeared in Time early this year, Rose made it clear that she has a strong opinion and is ready and willing to share it, so this move by the Viacom-owned company isn’t a huge surprise.

Uhh Ohh ? Muva has a Talk Show on @vh1 Produced by @DrPhil I finally have a voice & ur gonna love what I have 2 say pic.twitter.com/QCEQlNqOnj

The show does not yet have a title or official release date, but it is said to be premiering this summer. It will air once a week and will feature Rose interviewing celebrities and influencers.

The real question, of course, is if it will fare better than the talkshow of her sometimes-rival, Khloé Kardashian.