Why Hillary Clinton Nomination May Cost Democrats More Than the Presidency 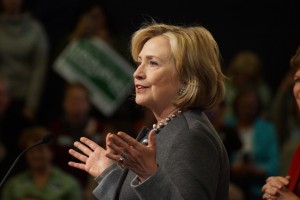 My major point of pride as a journalist is speaking with actual people whose lives often depend on the decisions political leaders make.

But I can promise you — Joe Scarborough didn’t visit the village of mobile homes in Elkhart, Indiana that I did recently. Chris Matthews didn’t talk to a family from this community, one of many whose lives were uprooted, and in some cases, destroyed, by the 2008 economic crash torpedoing their hometown; a hometown that at one point held the dubious distinction of having the highest unemployment — nearly 20% — of any county in the U.S. during the recession.

One of the women I spoke to is a single mother of two young children, Becky Ruis. Ruis, 34, lived in a home before the 2008 crash sucked the life out of Elkhart. As a result, she was forced to move into a mobile home. Eight years later, she’s making $10,000 less than she did at the beginning of the recession. In a good month, she’ll have $150 dollars left over for discretionary funds. In stormier times, decisions like medicine versus food must be made.

Her parents, homeowners of 25 years, were also evicted from their homes after her father, the sole provider of his household that includes a disabled wife, became one of the millions to lose their jobs thanks to the Murderers’ Row of Social Darwinists on Wall Street.

You think Paul Begala, longtime friend of the Clintons and CNN pundit, has Ruis and families like hers in mind when he pleads for supporters of Bernie Sanders to fold up the tent and “unify” with the candidate — and political party — whose political oxygen has, in large part, long derived from those same bankers?

But, we must defeat Donald Trump, the Begala’s of the growing media-meritocracy scream.

Covering the 2016 campaign for months all over the country, and actually reporting people’s stories rather than the horse race, I can confidently report to the pundit class and Democratic establishment:

Becky Ruis, and Sanders supporters like her, doesn’t give a fig about helping Hillary Clinton defeat Donald Trump.

Why would they — what has the Democratic Party asking for her vote done for her and her family?

Jail bankers responsible for her plight? No.

Respond to an epic financial disaster — similar in scale to the Great Depression— and reinstate Glass-Steagall and take the keys to the car away from Wall Street? Nope.

With a Democratic President and Democratic House and Senate, bailout the millions of displaced homeowners and laid off workers with direct financial relief, or expand special government-funded jobs, like rebuilding our roads and bridges?

A bailout happened: for bankers, who responded by showering themselves with millions in bonuses.

For all of this, the Democratic Party — and Hillary Clinton — have an answer for liberals who’ve revolted against them:

Change doesn’t come overnight. Change often comes in small “increments.” Politics is the art of the “compromise.” It’s great to want revolution — but politics is about pragmatism.

Buzzwords that have allowed income inequality, aka the systematic redistribution of money from the middle class to the already-doing-fine class, to explode over the last 35 years.

Supporters of Senator Sanders support him because they are smart enough — and angry enough — to see past these platitudes that sound wonderful in theory, but have in practice done nothing to raise their wages or offer a payoff to the endless hours they work just to provide their children with a shot to have the same lives they’ve been able to achieve.

This is what the pundits don’t get when they urge party unity. For the millions of Americans who’ve voted for Sanders, it’s not just about winning an election.

Dramatically changing the trajectory of their lives, and their children’s lives, is the end game.

And millions of them have concluded voting for Hillary Clinton will never bring that to fruition. So they won’t vote for her. Or candidates like her in the House and Senate. In 2016, 2018, 2020 and beyond.

Sure, the pundits warn of the looming epic disaster of a President Trump. What they can’t grasp — for Becky, and millions like her, they’re already living a quiet disaster.

One where personal growth and fulfillment has long been tossed aside; in its place — never-ending survival mode.

Fortunately for wealthy Democratic lawmakers, survival is something they don’t currently have to worry about.

They can continue to rest on their collective laurels, thinking changing demographics alone will guarantee the party presidential victories.

But, aside from the consistent polls showing Bernie Sanders as the strongest general election candidate to defeat Trump, they might want to rethink a Clinton nomination.

Or fall into survival mode as a party in the years to come.

When the millions of young voters across colors rejecting its brand of neoliberalism, and “pragmatism,” go in a different direction.

Jordan Chariton is a Politics Reporter for The Young Turks, covering the presidential campaign trail, where he’s interviewing voters on both sides along with candidates. Follow him @JordanChariton and watch videos at YouTube.com/tytpolitics