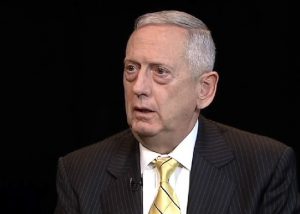 While the nomination isn’t likely to come until Monday, President-elect Donald Trump let the cat out of the bag during his ‘Victory Tour’ rally last night in Cincinnati that he was choosing retired General James ‘Mad Dog’ Mattis to be his Secretary of Defense.

If there is one thing we know, it seems that Trump really likes the fact that Mattis’ nickname is ‘Mad Dog,’ based on the relish in his voice when saying it last night and the fact that he’s referred to him as that via Twitter.

So, where did Mattis get this nickname? And is it something he actually likes?

Well, according to CNN, Mattis was called the name after the bloody 2004 battle for Fallujah during the Iraq War.

Mattis earned the nickname “Mad Dog” after leading combat troops into the Persian Gulf War in 1991, as well as Afghanistan and Iraq in the early 2000s.

He was called “Mad Dog” after the 2004 battle of Fallujah in Iraq, where he led British and American troops against Iraqi insurgents. He has backed up the nickname with off-color remarks, such as his 2005 declaration in a panel discussion about the Taliban that “it’s fun to shoot people.”

However, according to NBC, he is not fond of the moniker and likely prefers the other nickname that has been bestowed upon him — ‘The Warrior Monk.’ The 66-year-old developed this reputation due to the fact that he’s a lifelong bachelor who has dedicated his life to the military and is a student of military history. He’s also an extremely articulate speaker.

Mattis retired from the military in 2013 after taking over the role of running the US Central Command from Gen. David Petraeus in 2010. Since he has only been out of the military for less than four years, he will need to receive a waiver from Congress to serve as Secretary of Defense as law requires those who serve to be at least seven years removed from military service.