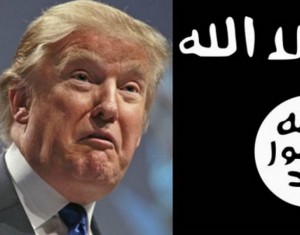 It’s not all bad news for Donald Trump this week. Sure both Democrats and Republicans have been blasting him for his response to the Orlando attack. But I think Trump is really close to sewing up a big endorsement. I’m talking about ISIS’s.

How can ISIS not endorse Trump after his antics this past week?! It was as if Trump was reading from ISIS-prepared speeches as he ratcheted up his demonization of both immigrant Muslims and Muslim Americans.  All that was missing was Trump labeling this as an actual holy war by the West versus Islam. (If Trump had said that, I’m confident ISIS would’ve endorsed Trump immediately.)

First, Trump reiterated his proposed ban on Muslims. ISIS loves that. Why? Well, as many counterterrorism experts have stated, this frames the conflict as a war pitting the West versus Islam. (Not just against the terrorists.) That enables ISIS to tell Muslims around the word that “America hates us” – the very same way Trump said a few months ago, “Islam hates us.”

Then ISIS can position itself as the great defender of Islam against the holy warriors from the West who are coming to kill them. In turn, this makes ISIS’s efforts to raise funds and attract new recruits much easier.

Secondly, Trump’s rhetoric stoking hate against Muslim Americans is also what ISIS loves. For example, Trump declared on Monday that American Muslims don’t cooperate with law enforcement, inferring that Muslims sympathize with ISIS.  (For the record, Muslim Americans have worked closely with the authorities to root out and terrorism as documented by numerous media outlets.)

So, how does this type of comment help ISIS? Again as numerous experts have explained including those at last year’s White House Summit on Countering Violent Extremism that I attended, ISIS wants American Muslims to be demonized.  And this type of comment does just that as Trump paints all Muslim Americans as potential terror supporters.

ISIS’s hope is that Muslims Americans will no longer feel like fellow Americans, but like a despised enemy, causing them to become alienated from American society. That makes it easier for ISIS to convince them (even indirectly) to exact revenge against the nation that has demonized, discriminated and attacked them simply because of their Islamic faith.

Now in contrast, Hillary Clinton truly seems to care less about ISIS’s endorsement. Her statement Monday after the Orlando attack emphasized uniting all Americans, not dividing us by faith as Trump did. She spoke warmly about Muslim Americans noting, “millions of peace-loving Muslims live, work, and raise their families across America.”

And much to ISIS’s chagrin, she even advocated working more closely with Muslim Americans, “not scapegoating or isolating them.” I can picture the guys in ISIS shooting guns into the sky in anger after Hillary denounced “isolating” American Muslims since ISIS desperately wants and needs.

Then, Hillary offered specific proposals to defeat ISIS.  For example, she proposed increasing efforts “to counter jihadist propaganda online.” And she called on  “Saudis, the Qataris, the Kuwaitis and others to stop their citizens from funding extremist organizations…and supporting radical schools and mosques.”

Cue even more ISIS’s fighters shooting guns into the air in anger and calling Hillary curses in Arabic. (Take it from me, you haven’t been truly cursed out until someone does it in Arabic.)

But to be fair, I think Trump had wrapped up ISIS’s endorsement well before this past week. His original  “total and complete shutdown of Muslims entering the United States” in December probably was enough to get them to lean Trump. And ISIS quoted Trump in a recruitment video in March after the Brussels attack, showing they were already fans.

Add to that, no doubt the guys in ISIS must love Trump’s sexism. One thing these radical Muslims like is a man who isn’t afraid to call women a “dog” or a pig.”

In fact, if Trump keeps it up, he could achieve the unthinkable and land the endorsements of both Al Qaeda and ISIS.  That’s no easy feat. Yes, I know to people on the right these groups both follow “radical Islam.” But news flash: They hate each other so much that they are literally killing each in Syria.  So if they truly both followed this made up thing called “radical Islam,” why wouldn’t they be working together to impose their common vision of “radical Islam”? (Spoiler alert: It’s because they are more motivated by a power and politics, not religion.)

So Trump keep your head up. You may have lost the support of people like former GOP Senator Larry Pressler who endorsed Hillary after seeing your response to Orlando shooting.  But any day now you might see ISIS’s leader Omar Baghdadi announce his support for you. And if that happens you really should feel good about yourself, after all you truly earned it.