Woman Whose Dream was to be on Jeopardy! Dies of Cancer Just Before Her Episode Airs 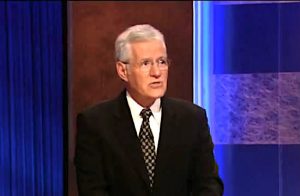 A woman who was set to appear in an upcoming episode of Jeopardy died earlier this week, a few days before her episode was set to air. According to host Alex Trebek, competing on the show was a “lifelong dream” of hers, an he said “we’re glad she was able to do so.”

KXAN reports that Cindy Stowell was a science content developer in Austin, Texas. She passed the online test to compete on the program, and before her in-person audition, reached out to contestant producer Maggie Speak. She wrote:

Do you have any idea how long it typically takes between an in person interview, and the taping date? I ask because I just found out that I don’t have too much longer to live. The doctor’s best guess is about 6 months. If there is the chance that I’d be able to still tape episodes of Jeopardy! if I were selected, I’d like to do that and donate any winnings to … charities involved in cancer research. If it is unlikely that the turnaround time would be that quick, then I’d like to give up my try out spot to someone else

Her longtime boyfriend Jason Hess told KXAN, “Cindy came on Jeopardy! to play the game she loved and in doing so, she was able to make a contribution to cancer research in the hopes that no one else would have to go through what she did.”

She was such a badass. She’s going to be on Jeopardy next Tues (12/13). Y’all should watch. pic.twitter.com/4FVcP5rmrO

Hess posted a photo of her, calling her a badass and reminding people to tune in to her episode, which will air on Tuesday, December 13.