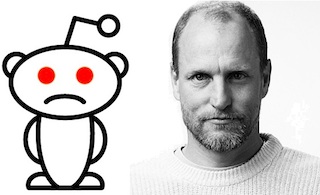 On the social-bookmarking website Reddit, there are few cherished moments as fulfilling as an AMA (ask me anything) session with an interesting person. Previous participants have included such luminaries as Stephen Colbert and Neil deGrasse Tyson. Folks who join the fray often give thought-provoking answers to user-submitted questions and have provided people with a clearer window into the lives of some of the most fascinating figures in our world. This would seem to be a no-brainer for someone like Woody Harrelson, whose pro-pot, anti-zombie sentiments would be seemingly sympathetically received on Reddit. However, nobody predicted the fiery train-wreck that unfolded when the actor’s AMA flung into chaos Friday after the actor took few questions and focused almost exclusively on his film, Rampart, which he was promoting.

Things began to unravel from the get-go, the very first question asked was about a one-night stand:

I swear this is a true story. I went to a high school in LA and you crashed our prom after party (Universal Hilton). You ended up taking the virginity of a girl named Roseanna. You didn’t call her afterwards. She cried a lot. Do you remember any of this and can confirm or have you been so knee deep in hollywood pooty for so long that this qualifies as a mere blip? (…)

This awkward exchange set the stage for what possibly could be the worst AMA in the history of Reddit.

How bad was it? A sample:

In response to Harrelson’s incomprehensible answer, a user replied with a link that went to this .gif from The Truman Show:

A moderator at AMA tried to explain how something that seemed so right could go so wrong.

“We knew that he wouldn’t have much time to do an iama and I believe that he didn’t quite know what an AMA entitled. He probably thought that it is somewhat like a talk show where you get to plug your movie/book and receive questions about it. It hasn’t been removed, he just isn’t answering more and we are talking to his PR rep.”

A disgruntled user summed up how bad the experience was:

You answered a total of 4 questions here today, and when I say “answered”, I mean that loosely. You have also embarassed Mr. Harrelson in the process. Please inform the rest of Hollywood that Reddit is not a publicity outlet and that Reddittors don’t tolerate this kind of crap.

edit: okay the final count for questions answered is 15 – it was 4 when i originally posted. if you want to read all of his half-assed comments, click on his account name.

Read the original thread here. Redditor jaggazz compiled all of the questions Harrelson “answered” below: