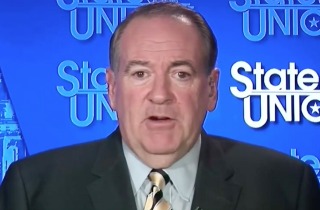 The Twitter account for former Arkansas governor/GOP presidential candidate Mike Huckabee is slightly unusual. While most elected officials may rely on some team of hip millennials to handle their social media accounts, it would appear as if the Huck himself thinks of verbal nuggets of goodness and hits the “SEND” button with reckless abandon.

Take this recent example from earlier this week, where Huckabee expressed his feigned outrage at The New Yorker‘s endorsement of Hillary Clinton for President.

Or there’s this recent roundhouse from his Twitter feed comparing a Donald Trump speech to a brutal blow from Chuck Norris.

Gettysburg speech by @realDonaldTrump strong as a Chuck Norris face kick. Joe Biden doesn’t really want to go behind the gym with Trump!

One more from the archives, this one compliments of the Vice Presidential Debate earlier this month in Farmville, Virginia (this one’s actually pretty funny):

Tim Kaine seems to think a VP serves the same function for a President as a yappy Chihuahua does for a socialite’s purse.

And this morning, the Huck is at it again, this time taking out his ire on Obama’s Affordable Care Act and its soaring premium costs for many Americans.

Like a dead beached whale, Obamacare is decomposing in front of us and stinking up the place. Think HRC, aka Hillarycare 93 is answer? NOT!

It would appear that he has taken on Donald Trump’s use of the single word exclamations (Sad! Mad! Dopey!) in his cetacean-related dropkick.

Never change, Governor. What will his Twitter account look like if/when Donald Trump loses on November 8th? I’m thinking something along the lines of “This election was so ‘fixed’ I could have sworn I heard Bob Barker warn people about it at the end of Price Is Right!”