Years After Erin Andrews Was Hotel Stalked, Video Proves It Could Still Happen to Anyone 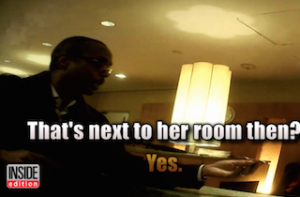 Back in 2009, sports reporter Erin Andrews was rapidly gaining notoriety and popularity, but not only because she was proving herself to be an extremely knowledgable and long-lasting voice in the arena of sports news.  Unfortunately, her massive spike in the national conversation was due to the fact that a stalker had found a way to illegally film her naked in her hotel room the year before.

Opinions were mixed at the time and some people even questioned whether she had somehow allowed or invited the stalker to film her while she was alone in a locked room she considered private. No one could have predicted then that eight years later, the topic would still be relevant and Andrews would still be seeking reparations. Two days ago, jury selection began for the $75 million civil lawsuit she has filed against the Nashville Marriott at Vanderbilt University for negligence in allowing her stalker such easy access to her. She also accused them of infliction of emotional distress and invasion of privacy.

In 2010, Michael Barrett, the man who followed Andrews to multiple cities and filmed eight videos of her changing clothes through peep holes in hotel room doors, was sentenced to two and a half years in prison. He was arrested in 2009 after TMZ turned him in for attempting to sell them the videos. It was revealed that he had simply asked hotel staff to put him in a room adjacent to his victim. They had obliged, telling him her room number and giving him the room right next to hers. Andrews had no idea.

What happened to Andrews goes well beyond the standard misogyny that female television personalities often face — and she still faces that too. If it can happen to an extremely successful ESPN reporter, it can happen to anyone, right?

Yeah, that’s right. In fact, eight years later, that’s still right. After the arrest, the hearing that sentenced Barrett, and this latest lawsuit and trial, Inside Edition found that what Barrett did to Andrews is still scarily easy to pull off.

In 2009, reporters from IE called the Marriott at which Andrews was filmed, asking to be put in a room near Lisa Guerrero, just as Barrett asked to be near Andrews a year earlier. They were told she’d already checked in, and while they couldn’t be in a room near hers, they could be one floor away. Following that report, the Marriott allegedly switched management and began enacting a stricter privacy policy regarding the names and locations of guests.

As a follow-up, IE decided to investigate the Marriott in Times Square this year and find out just how well that new policy held up.

We called to see if we could get a room next to IE’s Ann Mercogliano.

A clerk said she would put in a request.

When we arrived to check in, we were told we had a room a few doors down from Ann, who was never told someone had asked after her.

When we approached staff for comment, we were told to turn the camera off.

As Andrews embarks on what looks to be a ten-day trial against the hotel that allowed this to happen to her eight years ago, hotels around the country — specifically, those in the Marriott family — have not learned their lesson and are still remarkably lax about making sure it doesn’t happen to someone else.

This is especially nerve-wracking, especially for those without the resources to launch a lawsuit seeking $75 million or eight years to wait for justice.