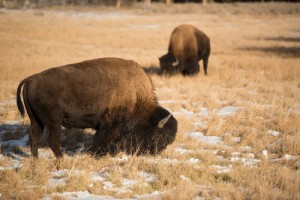 The Internet has found its new patriotic, wrapped-in-an-American-flag and doused-in-the-blood-of-its-enemies mascot for the United States — the lowly bison herd in Yellowstone National Park.

These bison have been around for a long time, and their once massive herds survived near extinction at the hands of hunters and traders through the 1880s. They’re survivors, this lot, and despite everything we’ve thrown at them, they’re more than happy to appear docile for tourists’ many photo ops. That is, unless you’re selfie-taking scum.

According to CNN, that’s precisely what happened to a 43-year-old woman and her daughter, who’d traveled to Wyoming to Mississippi to grace the park’s presence with their selfie-taking ways. The pair approached a bison, which was standing about six yards away, and posed for a photo.

“They heard the bison’s footsteps moving toward them and started to run, but the bison caught the mother on the right side, lifted her up and tossed her with its head,” the park service said in a statement Wednesday.

Most of this is due to my own selfie-hating, for sure, but Yellowstone’s bison herd doesn’t really know or care what a selfie is — let alone a smartphone. Rather, the offending creature was actually going on the defensive, since the would-be selfie takers were trespassing in its territory.

All of the National Parks are filled to the brim with warning signs and pamphlets warning visitors not to get too close to the wildlife. Yet as park ranger Colleen Rawlings told CNN, “The family said they read the warnings in both the park literature and the signage, but saw other people close to the bison, so they thought it would be OK.”

Rawlings continues, noting that “People need to recognize that Yellowstone wildlife is wild, even though they seem docile. This woman was lucky that her injuries were not more severe.”

And for good reason, for as CNN points out, this is the fifth time some idiot has been injured by a Yellowstone bison after getting too close. Three of those cases, by the way, involved incredibly stupid attempts to get a good photo.