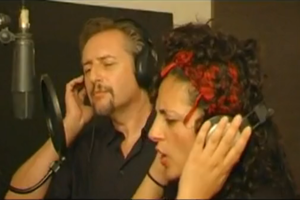 A video parodying the passengers on the Gaza-bound flotilla attacked by Israeli military several weeks ago, entitled “We Con the World,” has been pulled from YouTube, allegedly for a copyright claim from Warner Music, who own the rights to the original Lionel Ritchie/Michael Jackson classic “We are the World.”

The video, which went viral thanks in part to the Israeli government mistakenly sending it out to journalists from an official address, depicts artists imitating the flotilla passengers singing a song with their “real” intentions of attacking Israel. HotAir caught the story from Caroline Glick, who writes that attorneys told the group they would not have much trouble in the way of copyright, and that opponents of the parody would instead attack YouTube. Ed Morrissey at HotAir writes that he believes there is a history of YouTube siding against Israeli activists:

“As Glick notes, it’s not the first time that YouTube has come down against the Israeli side in its editorial decisions.  In 2008, the service removed several IDF videos of their actions in Gaza when Israel attempted to bypass what it sees as a hostile global media.  After an outcry, YouTube restored the videos but labeled them as potentially ‘inappropriate.'”

Chances are YouTube is just trying to keep itself out of trouble by removing a video making light of a tragic situation in which everyone with an opinion is extremely passionate. The strange part of all this, though, is why it wasn’t simply flagged as inappropriate if that were the case. Perhaps it is Warner Music itself that wants to stay out of the fray, making it very publicly clear that they did not sanction this and forcing YouTube to tag along, even though the question of legality when parody and satire are concerned is, at the very best, shaky.

Below is the video that was removed, for those who have yet to see it and are wondering what the fuss is about: