Fox News Seems Far Angrier With Jake Tapper Than the Insurrectionists Who Attacked the U.S. Capitol 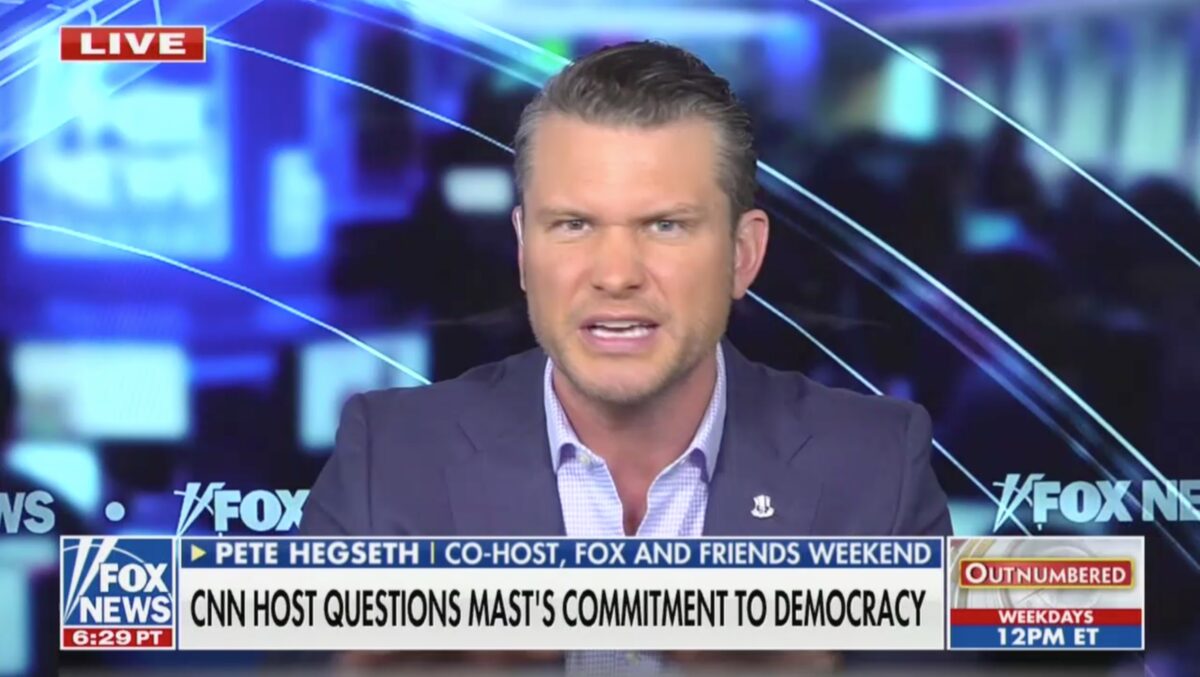 Fox News wants its viewers to know that they should be very angry with Jake Tapper right now. Laura Ingraham, Steve Doocy, Ainsley Earhardt, and Brian Kilmeade each dedicated air to taking shots at the CNN anchor.

It was Pete Hegseth, however, whose commentary got our attention — he compared the CNN anchor to an “emotional bowl of soup.”  It is not clear what sort of emotions a bowl of soup has, or what serial philanderer Hegseth meant, but it’s clear that in our currently divided nation, and according to these cable news personalities, Tapper is the bad guy.

What did Tapper do to earn such animus? He had the temerity to question whether military veteran Rep. Brian Mast (R-FL), who sacrificed both legs fighting to establish and preserve democracy overseas, supports democracy in the United States.

Oh no, Tapper ignored this heroic veteran’s military service? You might ask. No, he actually lauded Mast’s service, but questioned the congressman’s support for the false and dangerous lie of a stolen election, and his House floor stunt of silence in defense of the Capitol riot.

During the House impeachment proceedings on Wednesday, Rep. Mast tried to make the point that not one of the Democrats asked if the insurrectionists carried out their insurrection as a result of Trump’s rhetoric. He stood silent for 25 seconds as a curious way to illustrate that rather absurd point. There is a mountain of evidence, of course: protestors carried Trump flags, wore MAGA hats, chanted “Stop the Steal!” and were seen on video literally saying that President Trump invited them.

After Mast’s stunt, which was predictably lauded by the pro-Trump Fox News opinion personalities eager to absolve the president of responsibility in the attack, Tapper called him out.

Shortly after Dana Bash noted video of the people “who were storming the Capitol saying, ‘The president told us to come here,” Tapper replied. “What you’re saying right now is relevant, because [Mast], a Republican from Florida — who lost his legs, by the way, fighting for democracy abroad, although I don’t know about his commitment to it here in the United States — he said, ‘Did anybody say that?’”

A number of right-of-center outlets fanned the flames of outrage, which conveniently distracted right-of-center media consumers from the sad news that the president had just been impeached for a historic second time.

It should be noted that Jake Tapper is known for his support of U.S. veterans. Just two months ago he helped raised $400,000 for vets with the Home for the Troops auction. During more active times of war, Tapper would memorialize the individual lives lost overseas, and the war movie Outpost was based on his book, which painted soldiers in a remarkably human light.

But back to yesterday. Tapper’s “outrageous” comments praised Mast for his service which cost him both his legs. But there is no question that Mast has indefensibly signed on to multiple efforts to overturn the election in favor for President Trump, lending his support to the big lie that the election was stolen.

It was that support, along with 120 other Republican members of congress, and irresponsible amplification by pro-Trump media figures, that helped fuel the deadly and clearly anti-democratic insurrection by pro-Trump rioters who believed the lies spread by Mast and others. That is not beyond reproach, and surely worthy of criticism.

The outgoing president’s continued promotion of the lie that the election was stolen was clearly the catalyst of the deadly invasion of the Capitol last week, an attack that led to Trump’s second impeachment.

But Fox News would rather you be angry at Tapper, who obliquely addressed his sudden import on Fox news rundowns today via Twitter:

A week ago MAGA terrorists, incited by Trump, his son, his lawyer, and months of lies by far too many folks in the GOP and media, tried to stop the Constitutional election process through a terrorist attack on the Capitol. 5 were killed. They are now trying to change the subject.

What happened last week was horrific. Five dead that day, two subsequent suicides. Pay attention to the people trying to change the subject and ask yourselves why. Might it be because they bear some responsibility and want to avoid consequences? https://t.co/EctvpMVBWv

Who could Tapper be referring to here? Could it be Hegseth, the guy who covered the Save America Rally for Fox & Friends and has defended the seditious acts of that day? Hegseth suggested on The Five that because Trump didn’t say the word “insurrection,” he could not possibly have incited the violence.

Viewers of Fox News programming for the past 12 hours have been served far more outrage regarding the comments of a CNN host than the dangerous incitement of the president. It’s a classic move in partisan cable news that is equal parts distraction and whataboutism.

Fox News hosts and pundits have made clear that Tapper’s questioning of Rep. Mast, is a big deal. And President Trump’s pernicious lie that American democracy is dead? That outrage is left to other outlets.