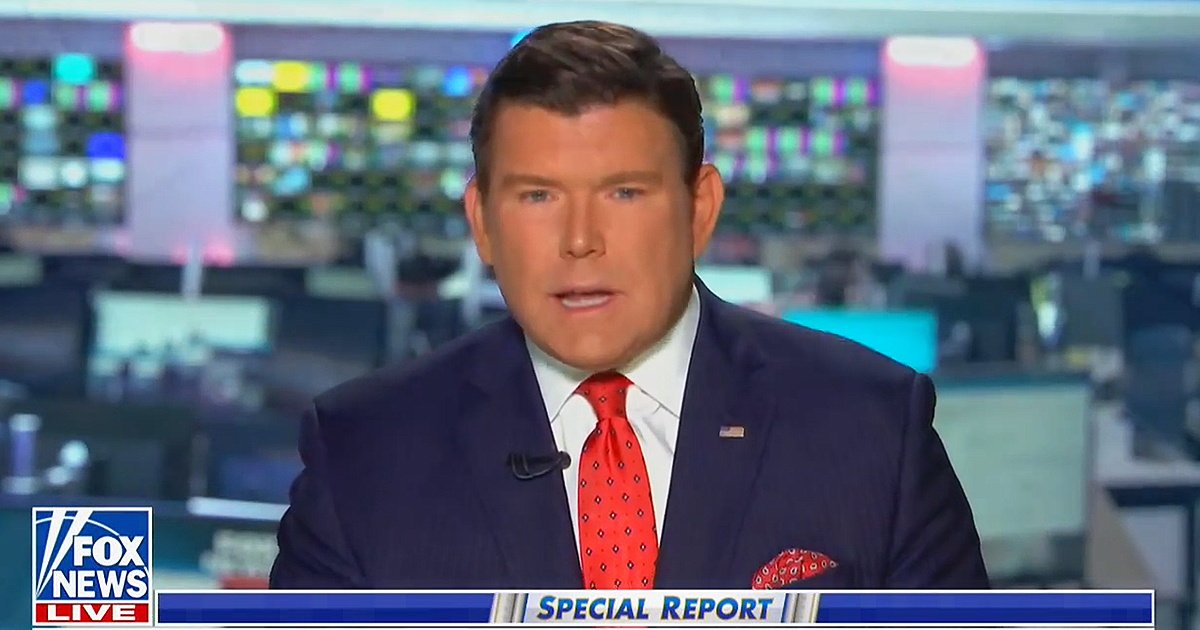 Fox News Channel anchor Bret Baier, host of the network’s afternoon news fixture Special Report, was the subject of an article from The Hollywood Reporter this week that attempted to impugn his often-touted credibility and impartiality as being a “misnomer,” as one of the cited sources for the article awkwardly put it.

“Over his 11 years as anchor of the 6 p.m. news show Special Report, Bret Baier has cultivated an image as the consummate down-the-middle, straight-news anchor,” writes THR reporter Jeremy Barr.

“But,” he says, “those who work with Baier at Fox News, have worked with the anchor in the past, and those who watch the channel increasingly question his impartiality in this polarized media landscape.”

The article takes pains to point out that FNC “points to Baier” when defending against criticism of its programming, which is no doubt the reason that Barr decided to challenge that by speaking to “more than a dozen cable news insiders and industry observers who see challenges for a network that depends, in part, on Baier for his palatability to national advertisers.”

The author then goes into a particular story published at Fox.

Baier, who has built a reputation for nonpartisan journalism, raised eyebrows recently with an “exclusive” April 15 story headlined, “Sources believe coronavirus outbreak originated in Wuhan lab as part of China’s efforts to compete with US.” The story was based on “classified and open-source documents and evidence” that the network did not “directly view.”

The reporter goes on at length about problems with the article in an effort to prove that Baier was either wrong or grossly ill-informed to suggest the virus was man-made. It’s a rather heavy subject for analysis or rebuttal, but it’s at least worth noting that the article he’s efforting to disprove explicitly calls it “a naturally occurring strain.” Here is more from National Review’s Jim Geraghty on the subject.

But the merits aren’t what prompted the inclusion of the specific story. Instead it’s meant to show that Baier was somehow influenced by a conservative bent or Trump affinity in writing it. It is essentially a bootstrap argument for why this examination of Baier’s impartiality is even being written. Not surprisingly, there are no corresponding articles from Barr and THR about, for example, the impartiality of Nicolle Wallace, Brian Williams, or even Jake Tapper.

But leaving that stepping stone to critique aside, what’s really telling, and the difference between analysis and a hit piece, shines through in the next section of the extensive article, which begins this way:

Unsurprisingly, Baier’s toughest critic is Angelo Carusone, the president of Fox-monitoring advocacy group Media Matters for America. “He’s supposed to be the news guy, and there are quantifiable illustrations of him advocating for conservative, partisan politics and ideas,” he says.

Unsurprisingly? Saying that Barr has a gift for understatement would be an understatement, since he is quoting Media Matters to bash someone at Fox News. Trashing Fox is their business model. Literally. You’d be hard pressed to think of any analogy that can encapsulate the futility of asking MMFA’s president to comment on Fox News. Water is wet, and the MMFA answer will be “Fox bad.”

The Carusone quote is followed then by one from an unnamed “former Obama administration official,” who unsurprisingly also took a shot, despite being presented by Barr as someone with a “positive” impression.

But critiques extend beyond anti-Fox advocates, even to people who have largely positive impressions of Baier as a journalist and as a person. “He is affable. He was always professional,” a former Obama administration official says of Baier. “I do think, though, that this idea that he is a sort of straight shooter at Fox News is a complete misnomer. He is part and parcel to the editorial bent of his network.”

Next up was a critique from journalist David Shuster, formerly of both Fox News in its early days (he left in 2002) and MSNBC but who displayed his liberal bona fides on both MSNBC and at now defunct Current TV, launched by Al Gore. He remarked that Baier doesn’t attack the network he works for, nor does he criticize the network’s opinion hosts when covering the news. That fairly innocuous observation is delivered as blow to Baier’s objectivity for some reason, with Barr introducing the quote with dramatic foreshadowing.

“Others ding Baier for his almost preternatural ability to avoid criticizing the occasionally inflammatory commentary of opinion hosts,” he said. Preternatural ability? Not attacking his colleagues during a normal straight news broadcast is an ability that exists outside the laws of nature?

“Bret doesn’t rock the boat and management clearly loves that about him,” said Shuster. Again, a fairly docile observation. But where Carusone’s critique elicited the pithy “unsurprisingly” adverbial interjection, the fact that some view Baier’s lack of internecine warfare positively seems to surprise the Hollywood Reporter reporter.

Some current and former colleagues see that as a positive attribute. “There’s no chatter, no back-biting, he stays out of that fray,” an ex-colleague says. “Bret seems to be above that fray, and that’s to his credit.”

Despite the premise, and the headline, and the tweets, the article is loaded with people who have nothing but glowing reviews of Baier and his work. Take ABC’s Jon Karl, who heads the WHCA, for example.

“Bret Baier is one of the most respected guys in the business,” says ABC News chief White House correspondent Jonathan Karl, head of the White House Correspondents’ Association. “He is a straight shooter and a true reporter.”

Or this, from former colleague Greta Van Susteren:

“Bret is a straight arrow,” says former anchor Greta Van Susteren, who worked in the office next to him at Fox News’ D.C. bureau. “He does not see news as a team — Democrat or Republican — sport.”

Axios CEO Jim VandeHei says Baier is “a smart, serious dude who seems to try his damnedest to play it straight and newsy.” Democratic National Committee chairman Tom Perez is quoted saying “I have great respect for Bret.”

One person in the article even called Baier “an adept news presenter” whose “journalistic reputation precedes him.” That person was Jeremy Barr of The Hollywood Reporter. He has also previously referred to Baier as “an important counterweight” to the Fox opinion hosts.

The lengthy piece carries on this fashion, with “cable news insiders and industry observers” offering praise for Baier, and then, unsurprisingly, criticism from Carusone and the unnamed former Obama official allowing them to put the partisan spin on it and create a headline.

Not to mention the… umm, evidence? of bias in the revelation that, despite “the president’s occasional animosity toward” Baier, Trump is less hostile to him than to fellow Fox anchor Chris Wallace.

“It’s an honor to have Bret Baier here,” Barr damningly quotes Trump as saying at a briefing. Case closed.

Barr wraps up the article by summarizing all the positive remarks about Baier and the scant negative commentary mostly from an organization that literally declared “war” on Fox News this way:

Compared to Baier’s subtle “partisanship,” a person who knows them both says that Wallace’s political leanings are nearly impossible to discern, adding, “I rarely see anything steep out of Chris Wallace, one way or the other.”

Oh. Was it a hit job gone awry? Was the original thesis or pitch not backed up by the reporting? Because the end result is messy without any insight into Baier.

Truly, it was an almost preternatural achievement in the storied history of attempted hit jobs.