BREAKING: Chaos in the House as Vote to Strike Pelosi’s Trump Remarks From the Record Fails 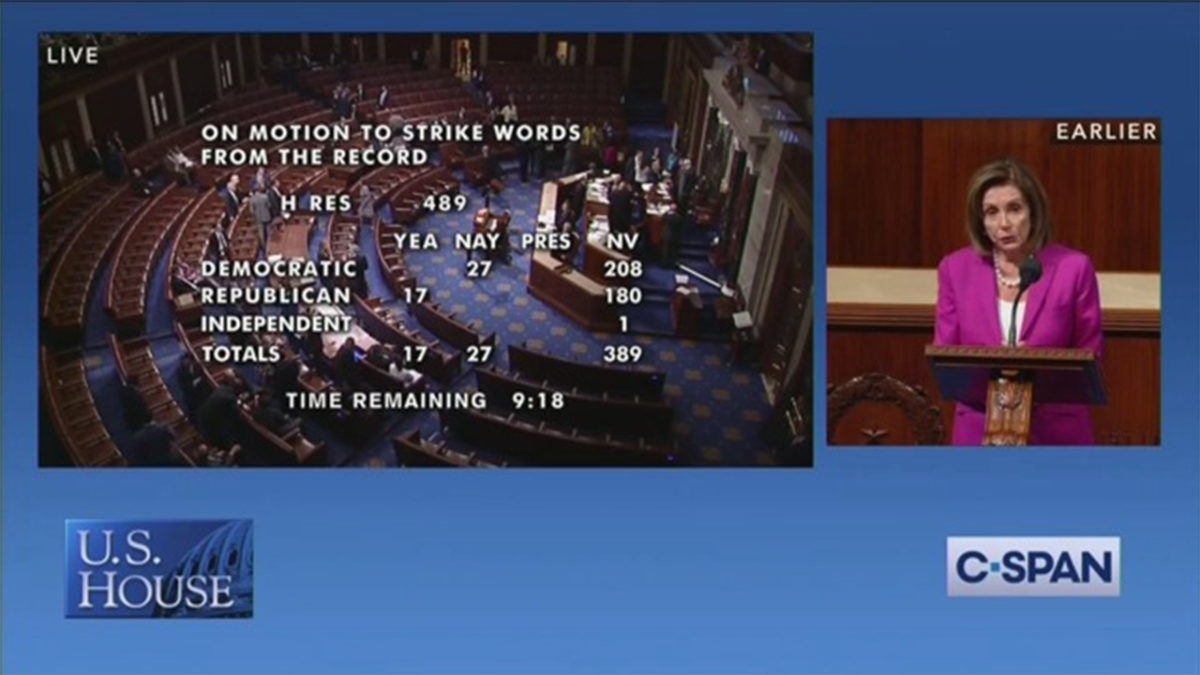 The House of Representatives has voted along party lines––232-190––against striking Speaker Nancy Pelosi’s remarks from the record after an objection raised by a Republican member that led to a very chaotic scene in the chamber.

Justin Amash, who recently left the Republican party to become an independent, voted with the Democrats against the motion.

To review: Republican Congressman Doug Collins objected to Speaker Nancy Pelosi’s remarks calling President Donald Trump’s tweets racist, regarding the resolution the House will be voting on later to condemn his remarks.

“These comments from the White House are disgraceful and disgusting, and those comments are racist,” she said before Collins objected.

After some debate, Congressman Emanuel Cleaver literally just abandoned the chair and House Majority Leader Steny Hoyer subsequently ruled from the chair that Pelosi’s words were out of order before they took up the vote.

Pelosi said in remarks to reporters later this afternoon that she doesn’t regret her remarks:

“I’m proud of the attention that is being called to it, because what the president said is completely inappropriate against our colleagues,” Pelosi told reporters. https://t.co/sgbV7MM1Hy

If this all seems chaotic and confusing, well, even some Washington reporters were struck by how this all unfolded:

TO SUMMARIZE:
– Pelosi called the president’s comments racist
– GOP filed an old-school objection, which requires the person in qstn to stay on the floor
– But Pelosi left the floor
– So did a frustrated Rep. Cleaver, who was in the chair
– NOW the full House is voting on this

This is so bizarre.

Pelosi can either withdraw her statement, or the House can vote on the issue.

If Democrats choose not to take her words down, they’ll literally be changing the House rules.

(This is all very stupid, but welcome to the U.S. House of Representatives.)

UPDATE –– 5:53 pm ET: The House has also voted to restore Pelosi’s speaking privileges on the floor.

Hse votes to allow Pelosi to “proceed in order” as though nothing happened, even though it was ruled earlier she broke House rules when it came to decorum. Vote was 231-190. Party line vote. Had the Hse not voted, the Hse would have barred Pelosi from speaking the rest of the day