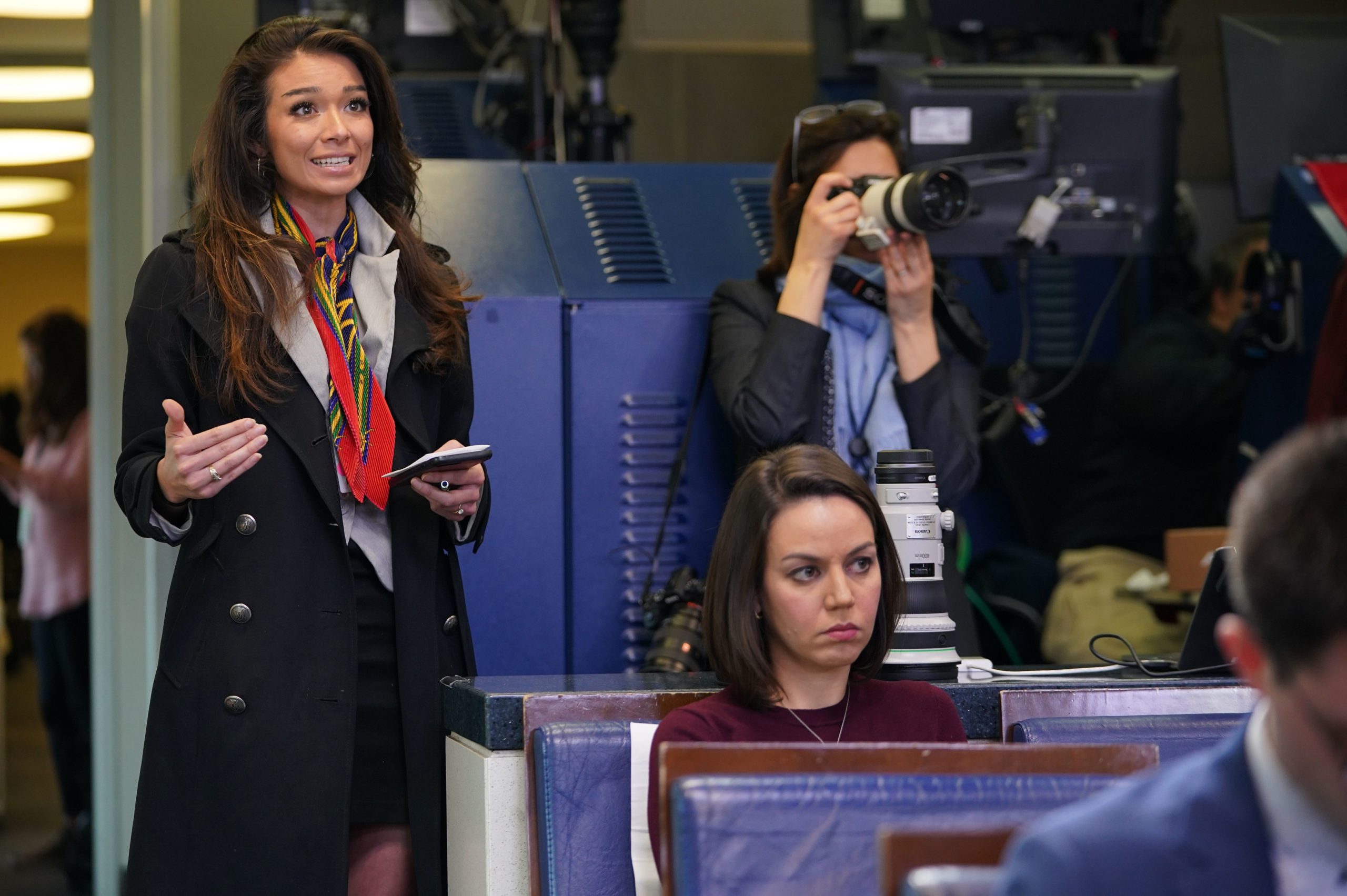 One American News (also known as OAN), a pro-Trump news network with a fondness for conspiracy theories, was expelled from the briefing room Wednesday night for ignoring new restricted seating policies that comply with social distancing.

The White House Correspondents Association voted to kick OAN out of rotation after personalities from the outlet circumvented processes designed to keep the press corps safe during the outbreak. When asked to leave Wednesday night, one personality claimed she was a “guest of Stephanie Grisham.” The press secretary has not commented on that claim.

The OAN personality who was asked to leave is Chanel Rion, a reporter who describes herself as “President Trump’s most stalwart graphic warrior against leftism.” She’s more widely known for pushing conspiracies, including peddling the theory that the coronavirus had been created in a lab in North Carolina. Rion made a splash a one briefing for asking the president if the term Chinese food is “racist.”

Most of OAN’s questions during the outlet’s short-lived career as part of the coronavirus briefing rotation were roughly that absurd, so here’s a list remembering all of them, from least ridiculous to most:

This question is actually pretty valid, considering clinical trial tests for the drug hydroxychloroquine are being conducted both in the U.S. and globally.

Rion: “Mr. President, Are narco militants, such as the Farc 57 front out of Columbia, or the Maduro regime, do you know if they’re working in conjunction with the Mexican cartel? Is there any intelligence indicating that?”

Out of context, this question seems pretty absurd, but this press briefing actually kicked off by discussing narco militants. President Trump unveiled counter-narcotics operations that senior officials said would target Venezuelan leader Nicolas Maduro, who was recently charged with drug trafficking in the U.S. Trump still dodged OAN’s question, claiming “I cannot tell you that, I know the answer to that. I believe I do, but I cannot tell you that.”

OAN tees up Trump to knock the press

OAN’s Jenn Pellegrino: “This morning the Washington Post ran a story suggesting that you delayed taking action on the virus in January and February. Dr. Fauci has indicated that your action in the Chinese travel ban helped America immensely. What do you say to The Washington Post?”

The President then went on to attack the press, singling out OAN, which he labeled “very fair.”

This softball question is mainly ridiculous due to its framing, which implied Trump did not downplay the virus prior to March. He absolutely did.

“Looks like by April, you know, in theory, when it gets a little warmer, it miraculously goes away,” Trump claimed during a rally in New Hampshire on February 10th. It’s April, and the virus continues to spread across the world.

Pellegrino: “Mr. President, your approval ratings have been the highest they’ve ever been, as well as the ratings on your handling of the virus, yet there are some networks that are saying they’re debating whether or not to carry these briefings live. Do you think there’s a link between the two?”

Approval ratings are an odd thing to ask any president during a global pandemic, and as if the question wasn’t bad enough the first time, when Trump went back to Pellegrino for a second question, she essentially repeated herself:

“Earlier this afternoon you had tweeted that there are on average 8.5 million Americans tuned into these daily press briefings, yet there are some networks out there that… are concerned about taking these briefings. What do you say to these detractors?”

Rion: “The WHO, this is on the topic of coronavirus in Iran, the WHO confirms that Iran is vastly underreporting its coronavirus cases, not just cases but fatalities. According to on the ground estimates, it might be as high as 15 and a half thousand deaths. 32 commanders in the military in Iran are now confirmed either in dire condition or dead. You have 8 percent of the parliament now down with coronavirus. So, is Iran’s soundings of aggressions today, that President Trump just tweeted about, do you think strategically, is that a bluff on their part? Or is this a sign of very clear desperation, where are you strategically on that?”

Rion’s question was in response to Trump’s somewhat confounding tweet on this topic, which New York Times investigative reporter Mike McIntire noted might suffer from a lack of evidence, given the president language regarding “information and belief.”

Upon information and belief, Iran or its proxies are planning a sneak attack on U.S. troops and/or assets in Iraq. If this happens, Iran will pay a very heavy price, indeed!

Rion: “2,405 Americans have died from coronavirus in the last 60 days, meanwhile you have 2,369 children who are killed by their mothers through elective abortions each day. That’s 16 and a half thousand children killed every week. Two states have suspended elective abortion to make more resources available for coronavirus cases, that’s Texas and Ohio. Do you agree with states who are placing coronavirus victims above elective abortions? And should more states be doing the same?”

This question was so wild that even Trump dodged it.

“I think what we’re doing, we’re trying to, as a group of governors — and that’s Republicans and Democrats — we’re just working together to solve this problem. What you’re mentioning has been going on for a long time and it’s a sad event, a lot of sad events in this country. But what we’re doing now is we’re working on the virus,” Trump responded.

First of all, a federal judge blocked Ohio’s attempt at banning nonessential surgeries during the coronavirus outbreak, something Rion should have considered before asking her question.

But more importantly, comparing coronavirus deaths to abortion rates in the United States is absurd.

OAN starts by asking about Chinese food, somehow gets crazier

Rion: “Do you consider the use of the term ‘Chinese food’ racist? Because it’s food that originates in China and has roots in China? And on that note. Major left-wing news media, even in this room, have teamed up with Chinese Communist Party narratives, and they are claiming that you are racist for making these claims about Chinese virus. Is it alarming that major media players, just to oppose you, are consistently siding with foreign state propaganda, Islamic state radicalism, Latin gangs and cartels. And they work right here at the White House with direct access to you and your team.”

The most ridiculous, and perhaps the most infamous, question asked by an OAN reporter. The question somehow managed to combine Chinese food, Communism, Latin gangs, and Islamic state radicalism. Honestly, a pretty impressive feat, so hats off to you, Chanel.