WATCH: Flash Mob Breaks Out in Front of Harvey Weinstein Trial Courthouse, Chants ‘The Rapist is You’ 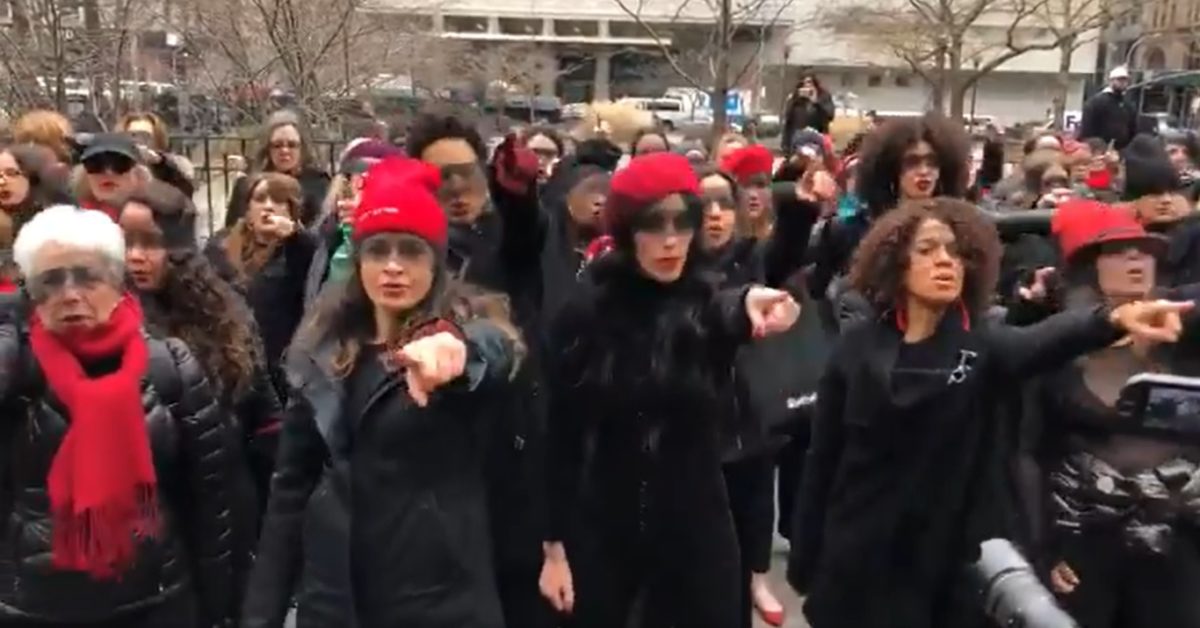 A feminist flash mob appeared outside the courthouse where accused sexual predator and Hollywood producer Harvey Weinstein is being tried, Friday, and chanted, “The rapist is you!”

“The patriarchy is our judge, that imprisons us from birth, and our punishment is the violence you can’t see,” the mob chanted in both English and Spanish, along with, “And it’s not my fault on where I was or how I dressed.”

Happening right now in front of the Weinstein trial court house: Over a hundred activists are performing “Un Violator En Tu Camino” – A Rapist In Your Path – the Chilean anti-rape anthem in English and Spanish. pic.twitter.com/sdCelWVoDB

Dozens of women just staged a protest using a Chilean anti-rape anthem outside of the courthouse where Harvey Weinstein is being tried: “The rapist is you.” pic.twitter.com/jiVZhRf6hV

Better video of the feminist flash mob outside the courthouse where Weinstein is being tried. The message, in English and Spanish: the problem of sexual violence is global, and it’s systemic. pic.twitter.com/gqHjxmPfIw

An hour or so into jury selection, we heard a flash mob outside banging pots and pans while chanting, “The rapist is you!” in Spanish & English. The defense unsuccessfully requested today’s jury pool be stricken. Judge Burke said he anticipates they won’t be the last flash mob. pic.twitter.com/mODyoJjkkM

The chant of the flash mob outside of the Weinstein trial: “It’s not my fault or how I dressed… the rapist is you.” pic.twitter.com/hZqILiQZnq

“He needs to know, because he’s gonna get out, and he’s not gonna have to pay any money for it,” declared one protester in a video posted to Twitter. “And he’ll be fine, and the people who are victims of sexual assault, sexual harassment… are not fine. They don’t get to just walk out and walk into a life of millions, so I hope he hears it and I hope justice is served. Justices for the women who have been victims of his terrible, disgusting behavior.”

The flash mob also demonstrated outside Trump hotel, where they chanted about the president being a “macho rapist.”

Final stop: Trump Hotel at Columbus Circle. They’re chanting: “The rapist is you. It’s the cops, the judge, the state, the president.” pic.twitter.com/zTDfH3mSG2

Weinstein’s trial for rape and sexual assault started this month, after he was accused by dozens of women during the #MeToo movement in 2017. He is currently facing one charge of raping a woman in a hotel room in 2013, and one charge of forcing another woman to perform oral sex in 2006.