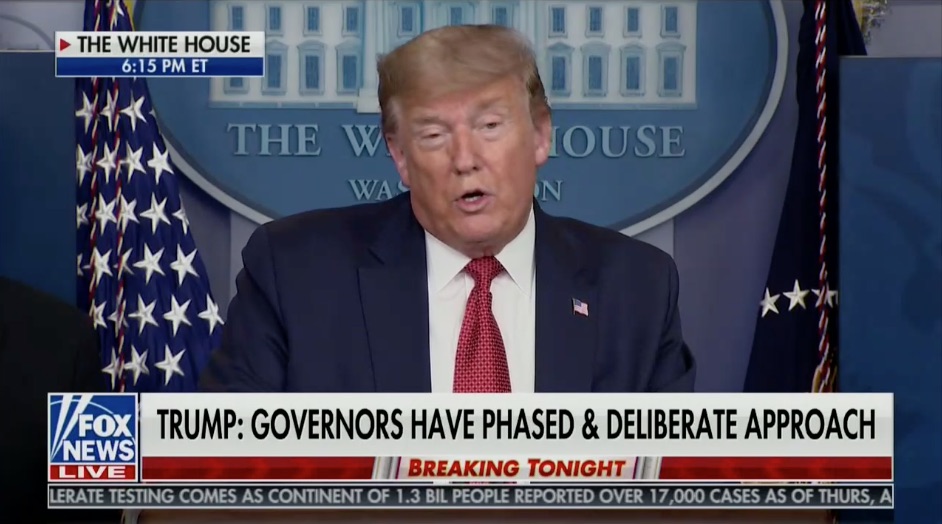 Fox News scored a monster ratings win thanks to President Donald Trump’s rollout of his broad plan for reopening the economy, scoring 6.4 million viewers overall and an equally impressive 1.29 million in the coveted 25-54 age demographic. Even Fox New’s second hour of coronavirus briefing coverage, which was mostly reserved for media questions, pulled in a eye-popping 5.15 million overall and 1.09 million in the demo.

That tentpole media moment helped Fox News top ratings across the board on Thursday, pulling in 2.99 million overall and 575,000 demo viewers in total day and 4.54 million overall and 781,000 in the demo during primetime. CNN claimed second place in total day with 467,000 overall and 629,00 during primetime in the demo. MSNBC, however, snagged a runner-up spot in overall total day and primetime viewers, edging out CNN with 1.71 million viewers to 1.61 million and 2.53 million to 2.18 million, respectively.

In the morning show battle, Morning Joe reclaimed the overall ratings title on Thursday after slipping below rival Fox & Friends on Wednesday. The MSNBC show’s comeback victory totaled 1.48 million viewers versus its rival’s 1.30 million. In the demo, however, the shows settled for a dead heat, with both shows reeling in 232,000 viewers.

The surging Cuomo Prime Time was pre-empted for a two-hour CNN Global Town Hall, which posted the best ratings for the network on Friday with 675,000 in the demo and 2.44 million overall. Fox News’ nighttime dominance continued apace with Tucker Carlson Tonight (4.9 million; 850,00), Hannity (4.75 million; 806,000), and The Ingraham Angle (3.94 million; 687,000) taking win, place, and show in primetime. The network’s lead-in to the White House briefing, The Five, also continued to draw big numbers, garnering 4.79 million overall and 857,000 in the demo.