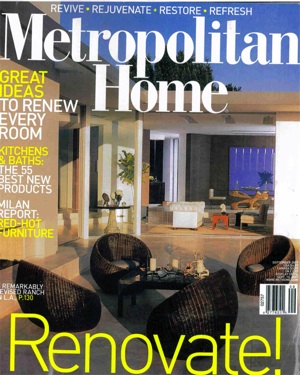 Alain Lemarchand, President & CEO, Hachette Filipacchi Media U.S. announced yesterday that the company will discontinue publication of Metropolitan Home magazine with the December 2009 issue as the last edition. In the current economic climate it made little sense for the publisher to carry two upscale titles left to fight for the same advertisers, so Hachette will instead focus on Elle Decor moving forward.

“It is with a feeling of sadness that I make the announcement to close one of our magazines,” says Lemarchand. “However, we believe the best strategy in the upscale shelter segment is to boldly focus our resources and investment on ELLE DECOR, which is the ad-page leader within the U.S. market. Despite the downturn in ad pages that has affected all magazines, the ELLE DECOR brand has multiple opportunities for growth across all platforms.”

As a result of the closure, ELLE DECOR will become a part of the ELLE Group led by Carol Smith, SVP, Chief Brand Officer, ELLE Group. ELLE DECOR’s editorial mission reflects its fashion heritage as the sister publication to ELLE and its international design perspective as the largest of 25 ELLE DECO editions worldwide. Margaret Russell, VP, Editor in Chief, Brand Content of ELLE DECOR, and Barbara Friedmann, VP, Brand Publisher of ELLE DECOR, will both report to Smith.

“As ELLE DECOR celebrates its 20th anniversary in the U.S., Margaret Russell is recognized as the editor in chief with the preeminent vision for what is chic and sophisticated in international design,” commented Lemarchand. “With Barbara Friedmann leading the business side of the brand, we look forward to healthy growth and further success.”

Metropolitan Home along with ELLE DECOR has been a part of HFM U.S.’s Luxury Design Group (LDG) headed by SVP, Chief Brand Officer Deborah Burns, who will remain with HFM U.S. Metropolitan Home Editor in Chief Donna Warner and her staff will be leaving the company.

“I want to recognize Deborah Burns’ outstanding job,” said Lemarchand. “She is a talented, creative executive whose capabilities are particularly valuable during these times when our success is predicated on our ability to embrace innovation and reinvention.”

“Metropolitan Home has been the premier publication for modern design. Over the past 26 years, Donna Warner has led the editorial team with a vision focused on the highest standards, which has produced this respected modern luxury publication. On behalf of the company, I want to thank Donna and her team for serving with such dedication,” said Lemarchand.