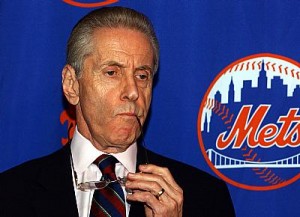 On Friday, Irving Picard, the trustee representing the victims of Bernie Madoff‘s Ponzi scheme, claimed in legal papers that New York Mets owners Fred Wilpon and Saul Katz and partners at Sterling Equities, had to know that Madoff was engaged in a Ponzi scheme and should have to compensate the victims. In papers just released, Mediaite has learned that Wilpon is fighting back, calling the lawsuit a “work of fiction” filled with “false allegations.”

Picard’s new allegations include references to “red flags,” which he claims should have served as indications to Wilpon and Katz that Madoff was scamming his investors. However, one “red flag” could become a key player in this spat. Did a hedge fund manager named Peter Stamos alert the Mets owners to inconsistencies in Madoff’s selection of investors and say that Madoff was “too good to be true?” If true, as Picard suggests, that could be the final inning for the Mets owners.

In the owners response, obtained by Mediaite tonight, they claim that in testimony, Stamos referred to Madoff as the “most honest and honorable man” and that Stamos never said the phrase “too good to be true.” Hmm.

General counsel of the New York Mets David Cohen is now calling out Picard like a trash talking catcher:

“The central allegations in the complaint are directly contradicted by sworn testimony taken by the Trustee’s counsel prior to the filing of the complaint. The complaint, which ignores that testimony, was filed in an effort to extract a huge and unwarranted settlement — with complete disregard for the harm that these misleading allegations would cause the reputations and businesses of the Sterling Partners.”

And so as the Madoff mess continues into extra innings, the question may become whether someone gets tossed for pissing off the ump.