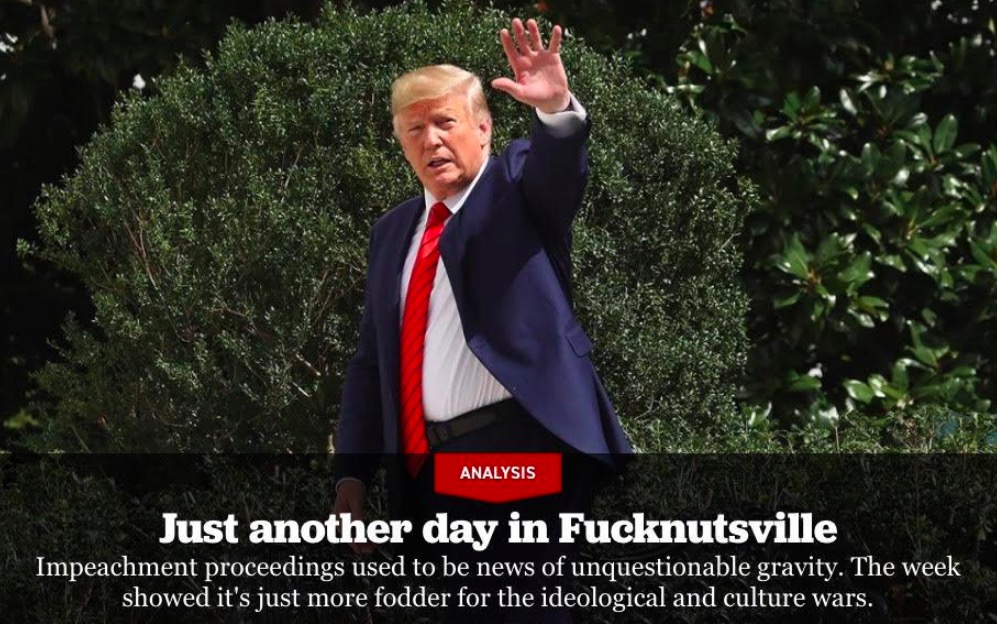 Politico Magazine updated a Friday story on how Donald Trump’s presidency has diminished the gravity of impeachment, as the piece’s headline, which originally read “Just Another Day in Fucknutsville,” was nerfed to remove the explicit expression.

After Politico updated the piece — penned by the outlet’s founding editor John Harris — several hours after it was published, the headline was cleaned up to read, “How Trump Killed the Seriousness of Impeachment.”

It is unclear why the outlet updated the piece, but the original headline citing “fucknutsville” was a reference to Chicago Mayor Rahm Emanuel, who coined the expression while describing Washington, D.C.’s unhinged political-media culture.

Mediaite reached out to Politico about their motivations for scrapping “fucknutsville” from the headline but the outlet declined to comment.

While writing about House Speaker Nancy Pelosi’s (D-CA) dramatic decision to launch an impeachment inquiry against the president on Thursday, Harris wrote, “For much of the country, it was just another day in what Rahm Emanuel, when he was Barack Obama’s chief of staff, called the metropolis of ‘Fucknutsville.’ The news may be important, it may be swerving wildly in surprising ways, but never these days is it something that commands reverent attention.”

Politico’s updated headline: “How Trump killed the seriousness of impeachment”

But they can’t change the URL. It still says “fucknutsville”https://t.co/jH8qUGveVb pic.twitter.com/ljymOiZkel

However, the original headline was quite popular with reporters. A number of media figures shared the story while praising the Emanuel reference, with some D.C. journalists expressing disappointment over Politico‘s decision to snub “fucknutsville.”

The fucknutsville headline is exponentially superior to the one they have now.

I salute Politico for running one of 2019’s greatest headlines – it has since been changed, tragically, but it lives on as a URL https://t.co/9kv3ga3oir pic.twitter.com/rKvdjXJg2j

I thought the Fucknutsville headline was good.

Remembering what it was like in “Fucknutsville” the last time we had an impeachment, by my great friend and partner ⁦@harrispolitico⁩, the gold standard of White House correspondents that the rest of us still try to emulate. https://t.co/sIRKpYwkva

The oral history of how this (real, now changed) headline came into existence will be a classic. https://t.co/SlLxO6WPFl

RIP Politico’s “Just another day in Fucknutsville” headline. Its reign was brief but glorious