President Obama To NY Times: Some Think I Usurp My Authority By Having Gall To Win Presidency
column

President Obama To NY Times: Some Think I Usurp My Authority By Having Gall To Win Presidency 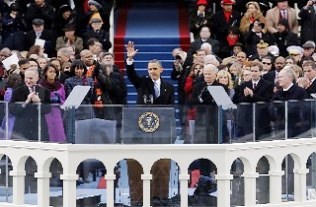 Over the weekend, The New York Times published an extensive interview with President Obama, conducted right after his speech at Galesburg, Illinois’ Knox College last week. Interviewers Jackie Calmes and Michael Shear managed to elicit lengthy responses that mainly resembled footnotes to the speech they’d just heard, but the President did manage to dispose of a few mainstream media talking points, pushing back against the notion that his legacy should be defined by Republican obstruction, and calling out the deranged drumbeat of that opposition.

The interview hewed closely to the content of that lengthy economic address, and curiously contained nary a mention of the President’s days-earlier remarks on the killing of Trayvon Martin, and its implications for black Americans. While a good deal of the President’s responses were repetitions or expansions of things he said during that speech, here are a few choice cuts.

First, the President pushed back on the popular Beltway narrative that he is somehow responsible for the deranged opposition that Republicans cemented the day he was inaugurated:

NYT: But do you worry, Mr. President, that that description of that sort of standing pat, what happens if you stand pat and the sort of slower than expected — do you worry that that could end up being your legacy simply because of the obstruction that — and the gridlock that doesn’t seem to end?

MR. OBAMA: Well, let’s separate it from me for a second, because I think if I’m arguing for entirely different policies and Congress ends up pursuing policies that I think don’t make sense and we get a bad result, it’s hard to argue that’d be my legacy. And so I’ll worry about my legacy later or I’ll let historians worry about my legacy.

President Obama also pushed back on Jackie Calmes’ suggestion that the so-called “sequester” was something that the President “and Congress agreed to,” which is a lot like saying that the Iran hostages and their captors “agreed to” a meal plan:

Well, let me back up, Jackie. First of all, as the economy got stronger during the course of my presidency, I had always committed to a responsible reduction in the deficit. I think that was the smart thing to do, the right thing to do, and good for our growth. And if we’re growing faster, if businesses and the markets have more confidence, then ultimately that benefits middle-class families as well. So I make no apologies for putting forward budgets consistently that, as I had promised, would gradually reduce the deficit.

Now, the sequester I did not want to be in place. When you say I agreed to it, what happened, as you will recall, in 2011 is, is that we had the prospect of either default or a willingness on the part of Republicans and Democrats to spend a year and a half trying to come up with a sensible way to reduce the deficit. The sequester was supposed to be something that was so damaging to the economy that both parties would want to avoid it. The fact that Republicans embraced the sequester as what they consider a win during the course of this year, despite all the damage that they said they wanted to avoid, for example, to our military, is different from me agreeing to the sequester. All right?

The President chided Shear, in response to a question about the Keystone XL Pipeline, that “my hope would be that any reporter who is looking at the facts would take the time to confirm that the most realistic estimates are this might create maybe 2,000 jobs during the construction of the pipeline — which might take a year or two — and then after that we’re talking about somewhere between 50 and 100 [chuckles] jobs in a economy of 150 million working people.”

Then, asked about Republican concerns that he had overstepped his authority by delaying implementation of the Affordable Care Act’s employer mandate, the President President Obama called out the years-long Republican drumbeat that he doesn’t know his place:

But there’s not an action that I take that you don’t have some folks in Congress who say that I’m usurping my authority. Some of those folks think I usurp my authority by having the gall to win the presidency. And I don’t think that’s a secret. But ultimately, I’m not concerned about their opinions — very few of them, by the way, are lawyers, much less constitutional lawyers.

At least President Obama can take credit for improving the vocabulary of conservatives, many of whom, prior to his presidency, thought “usurp” was a command you would give to the waitress at IHOP.

Although he wasn’t asked about it, the President did bring up the Trayvon Martin story toward the end of the interview, but instead of connecting it to issues of racial injustice, took the more expansive view that has characterized his approach through much of his presidency:

NYT: March on Washington coming up soon. Are you going to do anything to mark it? Are you planning on being a part of the 50th anniversary?

MR. OBAMA: Absolutely. It’s obviously a historic, seminal event in the country. It’s part of my generation’s formative memory and it’s a good time for us to do some reflection. Obviously, after the Trayvon Martin case, a lot of people have been thinking about race, but I always remind people — and, in fact, I have a copy of the original program in my office, framed — that that was a march for jobs and justice; that there was a massive economic component to that.

…And racial tensions won’t get better; they may get worse, because people will feel as if they’ve got to compete with some other group to get scraps from a shrinking pot. If the economy is growing, everybody feels invested. Everybody feels as if we’re rolling in the same direction. And so a lot of the other issues that we’re talking about — whether it’s climate change or immigration, or how we manage our trade relations — all those are eased if we’ve got our economic act together.

You can read the President’s full interview with The New York Times here.