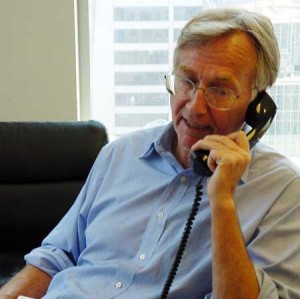 Why does everyone ignore Seymour Hersh? That’s what NYU Local publisher Cody Brown wants to know, asking furiously on Twitter: “Why did the NYT omit mention of Seymour Hersh from the CIA story?”

Hersh, the longtime New Yorker investigative reporter, was months ahead of the  New York Times on their bombshell CIA stories linking former Vice President Dick Cheney to secret CIA programs targeting Al Qaeda leaders, both on Saturday (“Cheney Is Linked to Concealment of C.I.A. Project” by Scott Shane) and Monday’s front page (“C.I.A. Had Plans to Assassinate Qaeda Leaders” by Shane and Mark Mazzetti). In a speech at the University of Minnesota four months ago, Hersh said:

“Under President Bush’s authority, they’ve been going into countries, not talking to the ambassador or the CIA station chief, and finding people on a list and executing them and leaving. That’s been going on, in the name of all of us.

And Hersh has been on the scent of under-the-radar cross-border teams operating in Iran for over a year.

Brown makes a good point: Where is Hersh in the crediting? And, more to the point, why didn’t anyone listen to Hersh months ago? Why didn’t anyone care?  Hersh doesn’t even get any credit under the CIA Times Topics other coverage bar (Chain of Command: The Road from 9/11 to Abu Ghraib (2004), however does get a mention) .

New York Times spokesperson Catherine Mathis dismissed the question of crediting, saying in an e-mail, “Our story said the plan never led to any missions; that no such missions were carried out. That’s quite different.”

Leaving the similarities between the two stories aside, there seems to be more here than just a newsroom’s reluctance to credit. Four months is a long time to pick up a story — but Hersh’s only went as far as the minor leagues, with pickup from a few places but no larger breakthrough (he did attract some skeptics, though). Hersh also spoke at length about Cheney on NPR shortly after the Minnesota speech, suggesting that Cheney had left “stay-behinds” in the Obama administration, including in the NSA — allies who would keep him in the loop and through whom he could potentially influence policy.  Again, his remarks got picked up in smaller outlets but failed to make a larger dent.

Sy Hersh has been right about Abu Ghraib, stovepiping, and has won a mantle’s worth of awards — so why aren’t people hanging on his every word? There is a contingent in the media community who view him with skepticism, despite his track record, who think that in between the scoops and stories Hersh displays an overzealous paranoia. Said one senior journalist who covers high-level issues of politics and national security:

“He sees ghosts around every corner — he’s been wrong a lot and he overreaches. It’s a little like the phrase, ‘a broken clock is right, twice a day.’  He is just hugely controversial. Methods, personality, results.”

But New Yorker editor David Remnick stands by Hersh, strongly: “If you quote me saying anything, I hope it’s that he is a national treasure.” Remnick, who has worked with Hersh for 11 years, said that this was not a question of Hersh’s Cheney story being turned down by the New Yorker, or of Hersh being doubted or questioned.

“I didn’t disbelieve him, of course I didn’t … he can’t write every story that he knows about,” said Remnick. “There’s a difference between talking and writing. There’s a difference between hearing things and suspecting that there’s a great story and nailing down to the degree to which you publish it in the New Yorker. And it’s my job to collaborate with Sy and as an editor to do that.”

As for the NYT credit, Remnick said: “It’s a hit or miss thing — I worked at the Washington Post for ten years — it’s not the most joyful part of your day when you have to credit your rival. Sometimes they’re right, sometimes they’re wrong — and sometimes you’ll see the credit ingeniuously placed … in investigative reporting, the difference between having nailed the story and having suspected it was there is a long distance — otherwise he’d be in the magazine every week.”

Remnick noted that part of collecting these stories is deciding which ones to run with: “Sometimes we want to kick ourselves.” Remnick says that Hersh is “working on something extraordinary — but while he’s working on story X he very often hears about Y and Z … he hears a lot of things. So does Jane Mayer, so does Steve Coll.” Remnick said that he and Hersh were faced with such a choice with the Abu Ghraib story: “Abu Ghraib was something he found out about in the midst of working on something else — it was like a triage thing in the emergency room — we had to dump the other thing and decide in two seconds which one to choose.”

Whatever the skeptics may think of Hersh — and however he may spout off rather than be safely fact-checked in print — Remnick says he is proud to have him. “To be hoenst, there aren’t many people doing what he does. So when you strip away all the commentators and all the rest — when you get down how many people are really up to their elbows in very, very hard-to-get stories, and then among those people, how many people have the sources that they’ve developed over time to really get there — not just suspect something, but get there — you’re now down to very narrow circle. And Sy is one of those people.”