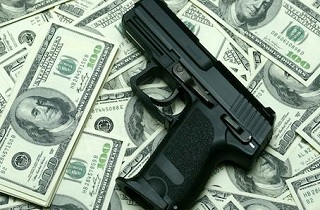 Everybody loves a winner, and the mainstream press has been betting on the gun lobby for a good long time, now. Despite evidence to the contrary, they have been fixing their narrative to a defeat of any and all gun regulation since shortly after the Newtown massacre. The latest example of this is a Washington Post report that claims “After gun bill’s defeat, it’s Democrats, not Republicans, paying the political price,” which is misleading on a number of levels, but continues the media’s self-fulfilling prophecy that gun control is doomed.

I really hate it when people just read the headlines, but that’s what happens a lot of the time, and my first read of that hed (as we call it in the biz) is that Democrats who supported the Manchin/Toomey bill are suffering some kind of consequence, like a slide in the polls, or a dip in favorability, or that the Democratic Party, writ large, is experiencing same. The clear implication is that gun regulation, which Democrats overwhelmingly support, is somehow politically unpopular, or costly in some other way.

In reality, that headline is a reference to the four Democrats who voted against Manchin/Toomey, and the “price” they’re paying is not getting donations from Mike Bloomberg‘s friends:

In a letter to more than 1,000 donors, Bloomberg called out the four Democrats — Sens. Max Baucus (Mont.), Mark Begich (Alaska), Heidi Heitkamp (N.D.) and Mark Pryor (Ark.). “Instead of rising above politics to pass a law that would save lives,” he wrote, the four senators “sided with a gun lobby increasingly out of touch with Americans’ priorities.”

“The next time these four Senators want you to support them with donations to their campaigns, tell them you cannot,” Bloomberg wrote.

By asking campaign donors to withhold funds, the deep-pocketed mayor went against the will of his congressional Democratic allies, who tried but failed to secure enough GOP support for the gun bill and have warned that public criticism of vulnerable Democrats who voted against the bill will result in Republican gains and less of a chance to enact new gun laws.

The premise, then, is that Mike Bloomberg, all by his lonesome, is going to cost these Democrats their seats, which maybe might help Republicans take back the Senate. In that way, you could argue, Democrats are potentially paying one very specific kind of a hypothetical price, if there’s never another vote on background checks before the midterms. The point of Bloomberg’s letter isn’t to defeat these senators, it’s to pressure them into voting the way their constituents want them to.

Not only are WaPo’s headline and supporting commentary complete crap, which is bad enough, they also ignore copious evidence that not only are Democrats reaping political rewards for supporting background checks, but Republicans are getting hammered for blocking them. And it’s not as if these guys are unaware of these polls; here’s how they characterize one of them (emphasis mine):

Gun-control groups united to rattle Sen. Kelly Ayotte (N.H.), one of the last Republicans to decide against supporting the measure, at town hall meetings in early May by placing victims’ advocates in the audiences to ask questions. Her statewide approval ratings took a modest hit after the vote.

Yeah, that “modest decline” after the vote was 15 points, a full 50% of New Hampshire voters said that Ayotte’s vote against background checks would make them less likely to vote for her in future elections, versus 23% who said it was a positive. As if all of that wasn’t enough, the “victims’ advocate” they describe was Erica Lafferty, daughter of slain Sandy Hook Elementary School Principal Dawn Hochsprung.

All of this would be dishonest enough coming from some partisan commentator, but this was not an opinion piece, it was hard news. The people that The Washington Post serves deserve better than this.