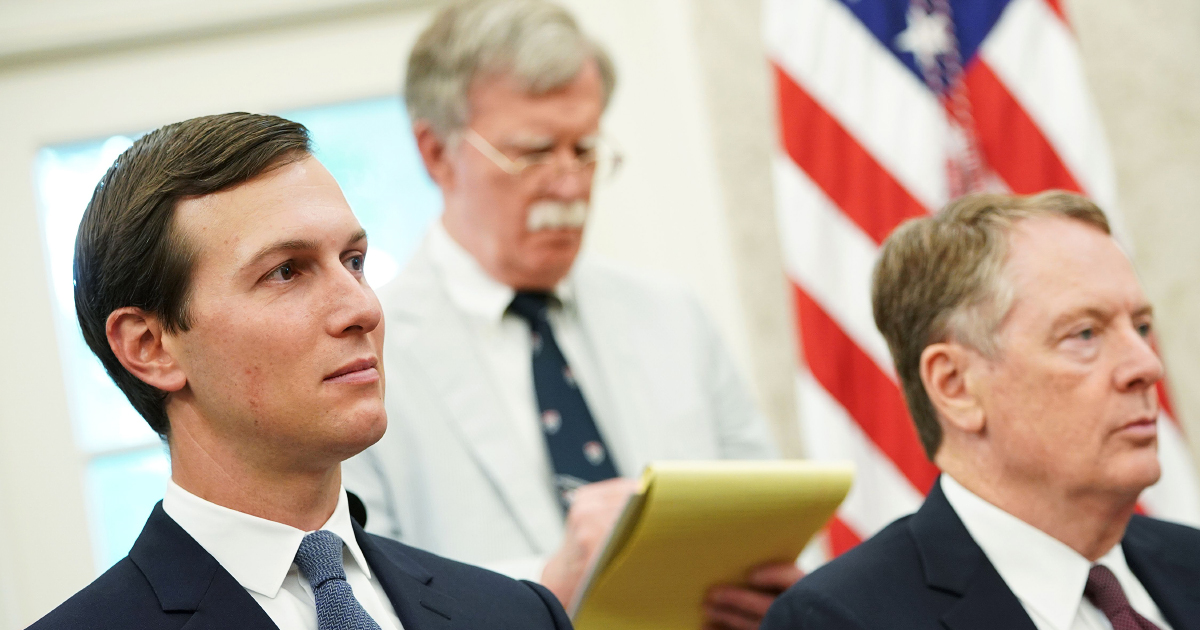 An apparent whistleblower from inside the White House has reportedly told Congress that the Trump administration has repeatedly overturned denials of security clearances, effectively substituting their judgment for that of the people tasked with vetting and approval.

The Washington Post reported on Monday that a White House security adviser, Tricia Newbold, is bringing her concerns to the House Oversight and Reform Committee, calling them her “last hope” for addressing the conduct.

According to Newbold, “dozens” of clearances that she and her colleagues denied have been overturned and approved anyway.

This is the latest development in an ongoing security clearance fight, prominently featuring top Trump adviser and family-member Jared Kushner. Kushner’s clearance has been in question for some time now, and Newbold offered more confirmation of prior reporting that Trump forced then-chief of staff John Kelly to approve Kushner’s clearance over the objection of intelligence officials.

The Washington Post Monday highlights a new letter to the White House counsel from Oversight Committee chair Rep. Elijah Cummings (D-MD). The information brought by Newbold to Congress would indicate a pattern of such behavior by the White House.

White House officials whose security clearances are being scrutinized by the House Oversight Committee include the president’s daughter Ivanka Trump, her husband Jared Kushner and national security adviser John Bolton, according to the panel’s letter.

One implication in the story is that National Security Adviser John Bolton‘s clearance was likewise denied, then overturned at the White House. Bolton has long held security clearances, having been in multiple highly classified positions including Ambassador to the U.N. and Under Secretary and Assistant Secretary of State.

Additionally, as we know from a previous letter from Rep. Cummings, the reason Bolton’s security clearance is being “scrutinized” by Democrats is that he was previously with the NRA, and they allege that he may have been in contact with Russian agents as part of the vast collusion conspiracy.

In fact, in that prior letter, Cummings indicates that the Trump-Russian collusion theory which was at the time widely accepted as true by Democrats and the media was a primary impetus in their investigation of clearances overall.

“Given the alarming and unprecedented nature of these revelations–and the high-level position of trust Mr. Bolton now holds–we request that you produce documents relating to whether Mr. Bolton reported his previous work with this alleged Russian spy on his security clearance forms or other White House vetting materials prior to President Trump appointing him to his current position.

The new letter from Cummings indicates upcoming “compulsory” action, starting with subpoenas, to obtain cooperation from the White House in providing documentation and response to the committee’s questions.

“In light of the grave reports from this whistleblower — and the ongoing refusal of the White House to provide the information we need to conduct our investigation — the committee now plans to proceed with compulsory process and begin authorizing subpoenas, starting at tomorrow’s business meeting,” he writes.

Whistleblower Newbold told the committee over the weekend that she has retained a list of names of those whose clearances were denied, but then overturned and given by the White House anyway. She has also, the Post reports, given a list of names of supervisors who failed to address her complaint, including notably Director of Personnel Security Carl Kline, whom the committee was already seeking to interview.

Although her ruling on a clearance application can be overruled according to the rules and procedures, she cites the lack of proper documentation of those instances among her complaints.

Newbold told the panel that she knew her denials of security clearances could be overruled. But she was initially concerned about a lack of documentation that went into those decisions and said those were made “without memorializing the risks they were accepting.”

The fact of a whistleblower speaking to the committee over the weekend serves to bring new life to the investigation that was predicated on a Trump conspiracy with Russia and might have simply petered out otherwise. Therefore Democrats offered a defense of Newbold’s impartiality.

“During her interview with committee staff, Ms. Newbold repeatedly made clear that her concerns are based on national security — not on personal animus towards anyone in the White House,” they wrote.

There is much, much more here at the Washington Post, including another prominent figure, “Official 2”.