Mediaite Q&A: Sportswriter Grant Wahl Speaks Out After Firing From SI, Talks About What’s Next After 24-Year Stint With Famed Mag 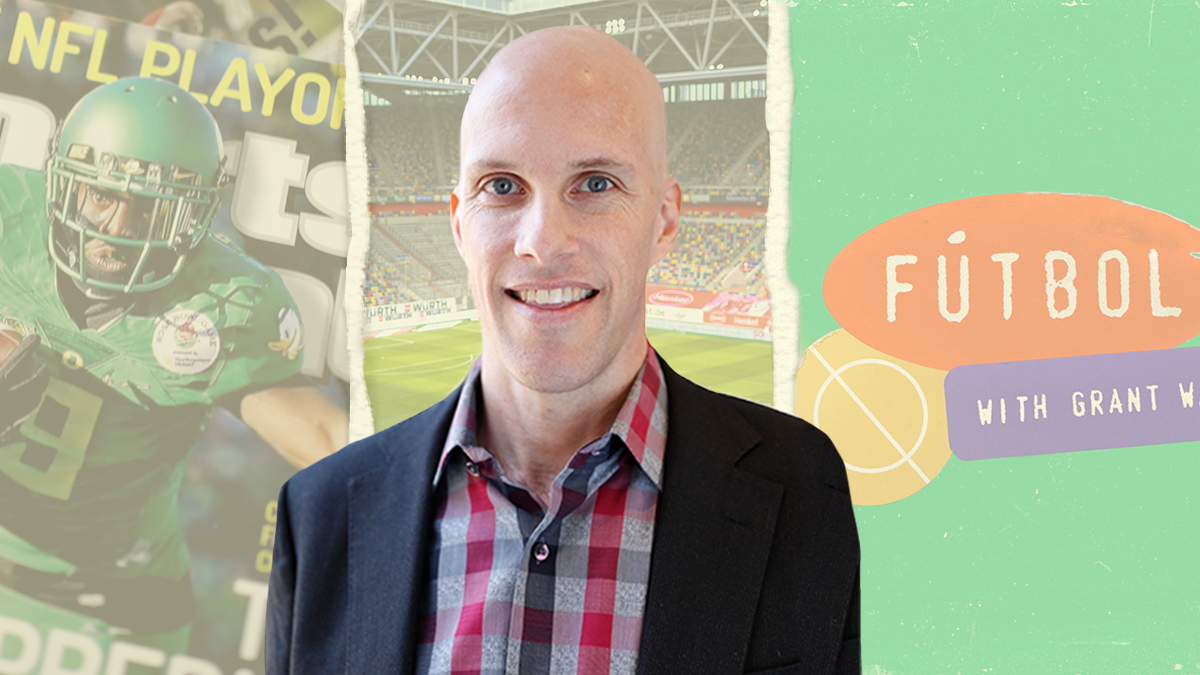 Top sports journalist Grant Wahl had only ever worked for Sports Illustrated. He became their premier U.S. soccer writer, covered countless World Cups, wrote the 2002 story that dubbed LeBron James “The Chosen One,” and spent over two decades at the publication. In April, Wahl was fired from Sports Illustrated in a day of back-and-forth statements between him, SI’s parent company TheMaven, and the company’s then-unrecognized union.

Now, Wahl is trying to figure out what’s next in the middle of a pandemic.

Wahl told Mediaite some of his favorite stories throughout the years and what’s next for the 45-year-old sports writer. This interview has been edited for clarity.

How has your quarantine been? What have you been up to during the pandemic?

I live with my wife in Manhattan and she happens to be an infectious disease doctor who’s a medical analyst for CNN. So it’s nice to be married to an infectious disease doctor during a situation like this because you feel like she knows what is the best way to try and deal with all this stuff. She’s just been an absolute rock star —her name’s Dr. Celine Gounder. She works at Bellevue Hospital treating Covid-19 patients. She has her own podcast called “Epidemic” about the virus.

We kinda joke because I cover soccer and this is like her World Cup. Obviously, it’s a lot more serious for society. But even though things have gotten better in New York, I don’t go outside our apartment building more than once or twice a week to get groceries. I just hope New York can come back. I remain optimistic because I love this city. It’s been a really tough few months.

Have you had to be away from your wife at all because if she’s working in a hospital?

She’s tested negative and took an antibody test. She’s pretty hardcore in terms of trying to protect herself as much as possible. What’s crazy was she volunteered for two months doing Ebola work in Guinea in 2014, early 2015 and she said that she had better protective equipment in Guinea than she did early on here in New York. And I was just like, that’s crazy. But so far, so good. Knock on wood on the health front.

Bundesliga was the first major sports league to really adapt to the pandemic and play. Do you think that’s a sustainable for other leagues and what have you noticed through its first weekend?

I guess you’d say it’s so far so good for the Bundesliga. You’re hoping that they could get these games off without fans in the stands and all these protocols and not have a spike in positive tests for the players or the support staff. There wasn’t a spike after the first week. For me as a soccer person, it’s just like a little bit of humanity. Yes, you weren’t seeing the atmosphere that you see the fans in the stands, but this was better than nothing. It was also reflective of Germany as a country and how it has done a pretty good job with the virus and set the conditions so that sports could return where the government was OK approving that. It didn’t seem like a huge risk. It’s kinda the same with South Korea and baseball coming back. I just feel like those countries did so much better with the virus than we have.

Wanted to talk a little about about your new podcast Futbol with Grant Wahl. You’re two episodes in, when did you decide you were going to create it and what should people expect with it?

Well, we’re kind of in an odd situation here — we’re in the worst employment situation of our lifetime. I feel confident I’m going to end up with a full time gig at a national outlet once sports starts up again. I knew there was going to be a stretch here where there wasn’t hiring going on and it’s a situation where I wanted to stay in the mix, keep my name out there, and do the work that I love.

The idea came to just do this podcast twice a week on my own and I am teaming up with these guys, the Total Soccer Show, who have the largest soccer podcast network in the US and they’ve been great to work with. What I’ve learned is that I can get prominent soccer figures to come on my show and I don’t need to be connected to Sports Illustrated for that.

It’s been a little over a month since you let were go from Sports Illustrated and criticized publicly by the company. Is there anything else you want to clear up about the situation?

I can only say what I’ve already said on my Twitter feed, which is any suggestion that I wasn’t a hard worker or didn’t reach meaningful audiences are just false. You can talk to anybody who’s an editor at Sports Illustrated and worked with me for over two decades there, they would say that’s false.

Has there been any conversations between you and Maven or you and Sports Illustrated union’s since April 10?

The SI union had yet to be recognized and that finally happened soon thereafter. So my situation unfortunately isn’t governed by the union.

The union did ask for like a public apology — before they had gotten recognized —and that hasn’t happened publicly. Do you any addition thoughts on that?

I was one of the most prolific writers on the national staff at Sports Illustrated, the quantity and with all the quality, too.

What do you think has been the biggest difference for you now being independent from Sports Illustrated?

We’re seeing the media landscape just accelerate its changes in recent years because of the virus. I think all of us need to think about how the future’s going to look and ask ourselves if that might be something very different from the way it’s been. I had one job, one full time job in my entire career for nearly 24 years. The question becomes do you potentially become an entrepreneur? Do you try and do something like that? Do you try and do something similar to what you did before? Thankfully opportunities are coming.

Over the last two decades, you’ve covered futbol and other sports extensively. Is there a favorite story of yours that you really enjoyed working on that’s worth highlighting?

The one that maybe stands out the most to the most people is the LeBron James story in 2002. When he was a junior in high school, they put him on the cover. If you read that story, it checked out pretty well [In the story, a 17-year-old James was named “The Chosen One”]. There’s so many stories over the years because soccer took me to places in the world that I never thought I would go to. I have such positive feelings about the history of Sports Illustrated and being a part of what I will always be convinced is — was the best sports publication in history.

You covered the 1999 Women’s World Cup with all of it’s history. Yeah. What was that experience like knowing that at that moment the sport would transcend in the United States like that? Did you know that at the moment or did it just happen?

I just remember heading into that ’99 Women’s World Cup that there wasn’t that much talk about it. My previous story for the magazine was a short little feature on Julie Foudy, the captain, but there wasn’t really a sense that this was about to become this transcendent cultural moment.

You started to really open your eyes in that first game at Giants stadium when you had nearly 80,000 people there for a women’s soccer game. You went to Chicago and saw another sold out stadium, then Boston area, DC, Stanford, then the final at the Rose Bowl. It was this exponential growth in the popularity of that team and that tournament, then finish it off with winning it. It was just a lucky thing to be able to have the privilege to cover.

If you were to take a guess, who do you think off the top of your head is the most famous soccer player you have in your phone or maybe you’ve talked to?

Globally, I would say maybe a coach, Jose Mourinho. If we’re gonna count Twitter DMs, Mario Balotelli in recent years, but I think I’m the only journalist he follows. It’s a good question. Domestically, you do build relationships with people over the years, so I have a text back-and-forth with Landon Donovan about the media’s coverage of the virus. He’s very curious about the whole thing.

How often is Donovan is texting you about that?

Toward the end of my podcast at Sports Illustrated he wanted to interview my wife, the infectious disease doctor, his questions about the virus and he was a very good interviewer.

Do you any other funny interview stories that stick out from the last two decades?

I was lucky that I never had any like disastrous interviews for magazine stories. Some things still stand out though, like David Beckham always arrives for the interview 30 to 60 minutes early and he’s the only person I know who does that. And he will literally shake the hand of every single person on the photo shoot crew which I’ve always thought was a cool thing that he did and it wasn’t for show.

I was young enough in 2002 to connect with high school LeBron and his buddies. They let me drive them in my rental car to an NBA game in Cleveland where Michael Jordan’s Washington Wizards were playing and Jordan hit a buzzer beater to win that game. Afterward, there was this scene of LeBron meeting up with Jordan who was already trying to recruit LeBron to Nike. It’s harder to do that stuff in 2020 then it was in 2002, but I like to think it’s still possible to some degree.

How has the job changed since starting in 1996 where at the time there wasn’t many US soccer reporters? Now there is more, but you could argue it’s harder to get access with social media and everything.

Back then, everything at Sports Illustrated was about the print magazine that came out every week. We didn’t even have a youthful website at that time and there certainly weren’t podcasts and little video. Obviously, things have changed over the years.

I was doing far more work for stories than I actually did in the late 90s, but the expectations were it would still be at the same quality. In the print magazine, it had gone down the priority list of things you were doing. I’d be writing upward of a hundred stories a year for magazine and website, I hosted a twice a week podcast, I was hosting a weekly video show for the Sports Illustrated streaming channel, I was doing a high end travel show for, for SI video.

In recent years, I almost had to fight to write old fashioned print magazine stories and I never want to stop doing these things. Yet, media changed so much that there wasn’t as much demand for that.